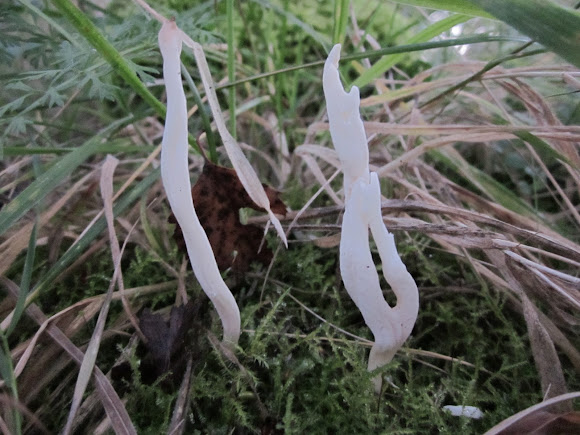 Clavaria is a genus of fungi in the family Clavariaceae. Species of Clavaria produce basidiocarps (fruit bodies) that are either cylindrical to club-shaped or branched and coral-like. They are often grouped with similar-looking species from other genera, when they are collectively known as the clavarioid fungi. All Clavaria species are terrestrial and most (if not all) are believed to be saprotrophic (decomposing dead plant material). In Europe, they are typical of old, mossy, unimproved grassland. In North America and elsewhere, they are more commonly found in woodlands

Most Clavaria species are thought to be saprotrophic, decomposing leaf litter and other organic materials on the woodland floor. In Europe, species are more frequently found in old, unimproved grasslands where they are presumed to be decomposers of dead grass and moss. At least one species (Clavaria argillacea) is, however, typical of heathland and is a possible mycorrhizal associate of heather. Species of Clavaria occur in suitable habitats throughout the temperate regions and the tropics. Some 15 species are known from Europe; according to one 2008 estimate, 28 species are currently recognized worldwide

i had found them beneath a young oak-tree, all are max. 1 m away. ---Fruit bodies are simple (cylindrical to club-shaped) or more rarely branched, sometimes with a distinct stipe (stem). Several of the species with simple fruit bodies form them in dense clusters. The fruit bodies themselves are smooth to grooved and typically brittle. Depending on species, they vary in colour from white or cream to yellow, pink, violet, brown, or black. The hyphal system of Clavaria species is always monomitic. The context hyphae are inflated, thin-walled, and lack clamp connections (though Petersen's amended concept of the genus includes some species with clamps). The basidia are two- to four-spored, in some species with an open, loop-like clamp connection at the base. Spores are smooth or spiny. Spore prints are white