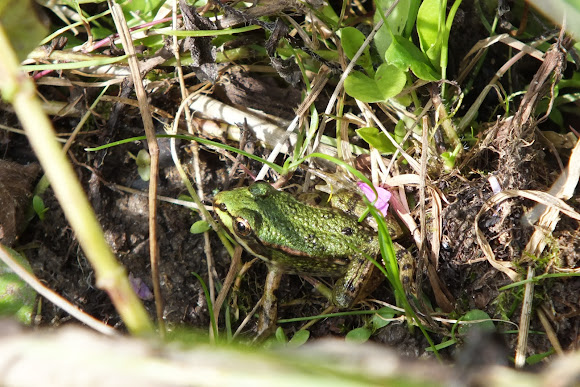 Pelophylax kl. esculentus is the fertile hybrid of the Pool frog (Pelophylax lessonae) and the Marsh frog (Pelophylax ridibundus), hence the addition of the kl. for klepton in the species name. The Edible frog is a medium sized frog growing to around 9cm in length. Females tend to be larger than males and have been known to get up to 12 cm long. Adult Edible frogs are mainly green in colour with light patches of brown on their backs, yellow eyes and a white underside, covered in a few dark spots. There are number of distinct differences between males and females including the fact that males become much lighter and greener during the mating season. Male Edible frogs also have vocal sacs on the outside of their cheeks and extra skin patches on their feet, both of which are primarily for mating.

The Edible frog is found across central Europe and as far north as Germany and Estonia. Southern populations of the Edible frog are found from Croatia, through northern Italy and into the south of France. There are also isolated populations in Sweden and Bulgaria which are thought to have migrated from the countries nearby. Edible frogs spend all of their time either in or very close to water and are most commonly found in calmer parts of rivers and streams, where there is a slow but constant flow of fresh water. They are said to prefer more open areas and can also be commonly spotted around lakes, ponds and marshes.

Juvenile Edible frogs spotted on a flood plain of the Ijssel river in rural area of Deventer, Holland.