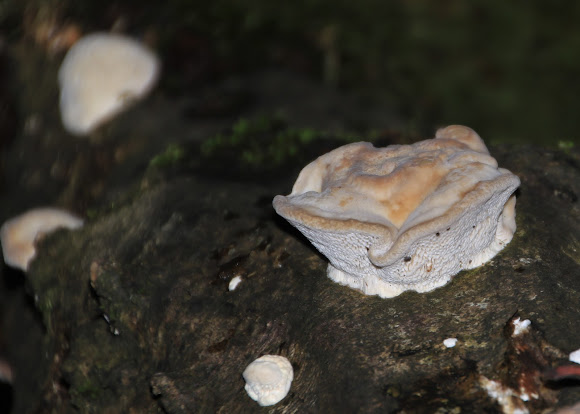 At a first glance this did not look like anything interesting nor something I would be able to ID later on, so in the beginning I did not pay it enough attention, which I regret today. Carpophores are of irregular shape, felted light-brown surface above with well defined margins often curving upwards. There is no well defined stipe, but something resembling it on one carpophore (pic N° 3). Surface below white, with large pores, it seems. The biggest ones (pic N°1 and 2) were about 7 to 8 cm across.

Found growing directly on a decaying hardwood log on a forest floor in a lowland broadleaved forest - mainly oak and beech; in Geneva lake valley.

Another interesting fungus with whose ID I've been fighting for few months... I'm starting to think this could be the Oak Bracket (sometimes also called Weeping Polypore) or Pseudoinonotus dryadeus. The distinguished characteristics of this polypore is that it exudes droplets of reddish-amber honey-like ooze on its surface... which was totally missing when I spotted these. Moreover, as I did not take that opportunity into the account, I had not try to take closer look or return later on... Few days ago, I noticed something like larger pores on its felted surface (pic N° 2 for details) and toward margins of other carpophores, which finally leads me to consider that one. It would be really appreciated if someone can confirm or propose better idea...