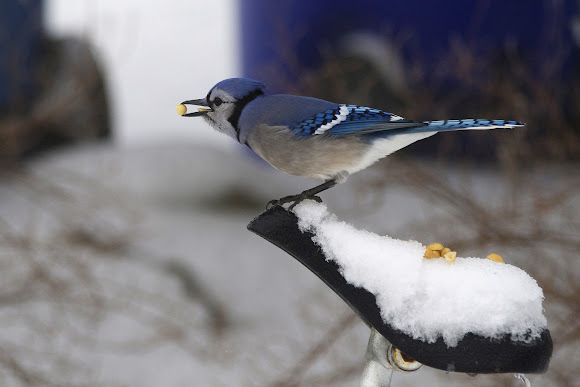 The Blue Jay (Cyanocitta cristata) is a passerine bird in the family Corvidae, native to North America. It is predominately blue with a white breast and underparts, and a blue crest. It has a black, U-shaped collar around its neck and a black border behind the crest. Sexes are similar in size and plumage, and plumage does not vary throughout the year. Four subspecies of the Blue Jay are recognized.

It is resident through most of eastern and central United States and southern Canada, although western populations may be migratory. It breeds in both deciduous and coniferous forests, and is common near and in residential areas.

Please consider putting this spotting in the ‘Hunter’ mission at
http://www.projectnoah.org/missions/8463...

such a beautiful blue and a lovely bird too ! - great pics !!

Updated to include winter photos.

Thank you for the kind words Steve A!

A great series Courtney - your pix are always so clean, well done

Thank you dandoucette. I have added this to the Niagara Region mission.
Really appreciate you putting that together. Most of my spottings are in that area of Ontario. Thanks again!

I love this bird..!! Beautiful!

Hey Courtney
I've created a new mission to document the wildlife of the Niagara Region and this is a perfect spotting to submit. I hope you join the mission to help document the flora and fauna of our area.
http://www.projectnoah.org/missions/7716...

Thank you, alicelongmartin. There were actually 3 or 4 of them flying back and forth between some pines and this patch of grass. I think they were collecting dead grass maybe for a nest?

Lovely series. He must have really been looking for something to let you take that many pictures.