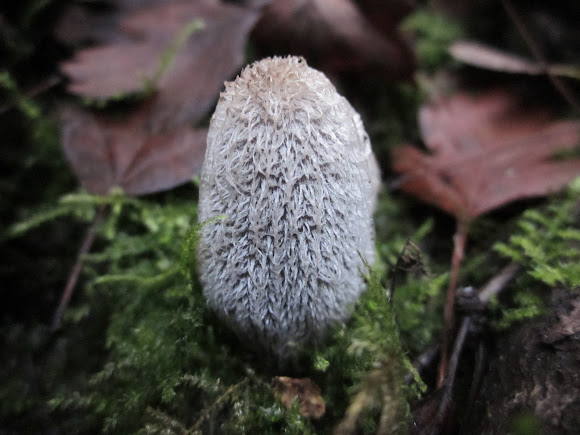 Coprinopsis cinerea is a species of mushroom in the Psathyrellaceae family. Commonly known as the gray shag, it is edible, but must be used promptly after collecting

Recent DNA studies have resulted in some fascinating rearrangements of the coprinoid mushrooms. The fact that a mushroom's gills liquefy and turn into black goo, it turns out, does not necessarily mean it is closely related to other mushrooms that do the same thing. Thus the traditional genus Coprinus, which was conceived on the idea that deliquescing gills (and other physical attributes) indicated genetic relationship, turns out to hold mushrooms that are so far apart, genetically, that they do not even belong to the same family, let alone the same genus. For more on "convergent evolution" (the term used when organisms develop similar features independently, without being closely related) see What, If Anything, Is a Gilled Mushroom?" "what,if..." is on the link from "mushroomexpert"

Inky caps are fascinating mushrooms. They are saprobes, assisting in the decomposition of wood, dung, grassy debris, forest litter, and so on. Most of the species have black spore prints and gills that liquefy, at least partially, as the mushroom matures. The resulting "ink" provides the common name for the inky caps, and can actually be used as writing ink. But the mushrooms, of course, do not have the production of ink for writing in mind. Rather, liquefying the gills is a clever strategy for dispersing spores more efficiently. The gills liquefy from the bottom up as the spores mature. Thus the cap peels up and away, and the maturing spores are always kept in the best position for catching wind currents. As this happens, the shape of the cap progresses from more or less oval (when seen from the side) to broadly bell-shaped and, eventually, more or less flat as the spores nearest to the stem are exposed to the air currents. http://www.mushroomexpert.com/coprinoid....

Totally cool! and I love all the info you have included.