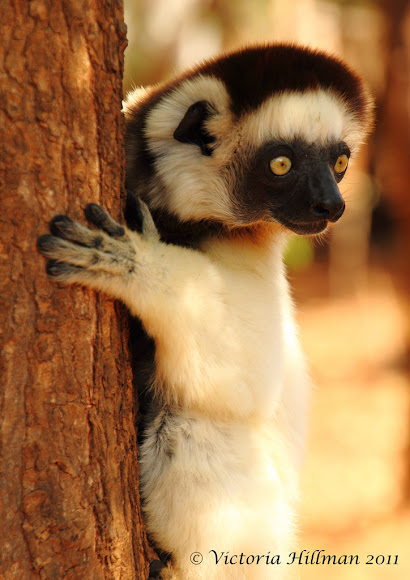 Medium sized lemur in the Indriidae family found in a variety of habitats and are famous for their "dancing" across open spaces but do also makes huge leaps between trees. This lemur has long, thick, soft hair that is mostly white with a dark brown crown that extends down the back of the neck. It has a dark grey or black face which contrasts with its large, bright, yellow eyes. The fur is thinner on its chest, belly and underarms allowing the grey skin to show through, and male Verreaux's sifakas may also have a faint reddish-brown area on the chest, caused by a gland at the base of the throat.Like other sifakas, its arms are short, and somewhat limited in their movements; however, their hind limbs are large and strong, providing the power for them to leap from tree to tree. The name of the sifaka comes from the sharp, piercing call that this primate makes, which sounds like shi-fahk. This species is currently listed as vulnerable on the IUCN Redlist with habitat destruction being a major threat.

Dry and spiny forests of southern and southwest Madagascar from the Tsiribihina River to Andohahela Sifakas feed on leaves, fruit and flowers. Verreaux's sifaka is the most common species of sifaka. At home in the trees, sifakas are powerful jumpers but on the ground they are somewhat awkward due to their splayed feet. Since trees in their habitat are often dispersed, sifakas cross open ground by sashaying on their hind legs with arms aloft. They are often known as ""dancing lemurs"". Sifakas also have the remarkable ability to leaping from tree to tree in the spiny forest where virtually every branch is covered with thorns or spines.

A beautiful series. What a stunning way to capture these (sadly) endangered animals.

Thank you Yuko. This was before I joined Project Noah. What a wonderful series!

Thank you everyone.
Leuba - habitat destruction is the major threat for these particular lemurs, although they can be predated by fossas it's a natural predator-prey relationship

Congratulations ! - great pics and a lovely animal. I assume habitat destruction is affecting them more than predation by Fossas.

Great series. Congrats on the accolades. They are well deserved.

The last picture is adorable!

Congrats on the Spotting of the Week. You certainly deserve it. We are all glad for you. :)

These pictures look like scenes from a movie. Congrats.

Spotting of the Week!

"Medium sized lemur in the Indriidae family found in a variety of habitats and are famous for their "dancing" across open spaces but do also makes hugs leaps between trees. This species is currently listed as vulnerable on the IUCN Redlist with habitat destruction being a major threat."

Congrats for NatGeo spotting of the week.

Wow, I'm humbled, thank you so much for spotting of the day and Nat Geo spotting of the week. Thank you for all the amazing comments it makes me very happy that everyone is enjoying this wonderful animal, I couple only put some shots on here but if you want to see more there are plenty here (I think I have more images of this lemur than any others!)
http://www.flickr.com/photos/victoriahil...

StanislavStanZabransky - I don't mind as long as it is only for personal use as the images are copyrighted and may be entered into a competitions next year.