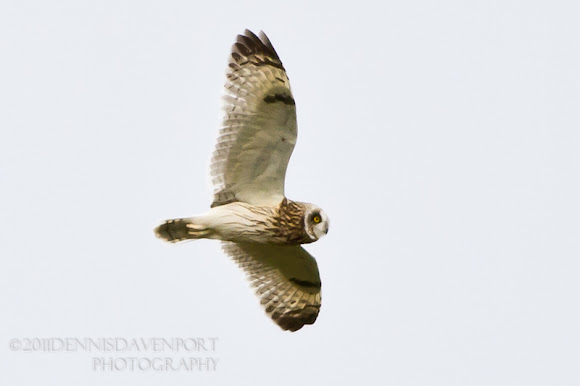 I visited the Ridgefield NWR today, Oct. 26, 2011, and was parked in front of Rest Lake shooting a female harrier that was flying around over the lake. I then noticed another bird flying in the vicinity of the harrier, circling over the ducks and geese. It was quite far out there and I couldn't ID it, even through the viewfinder. I took a few seconds of burst shots then the bird left the area and flew south. At first I thought it might be a male harrier because of the black wingtips but its wing cadence was distinctly slower than that of the female harrier that was also in the area. When I got home, I processed these HEAVY CROPS and realized then I had a Short-eared Owl. This is my 2nd SEO that I've seen and photographed in my five years of shooting at the refuge. This bird is listed on the refuge Bird Sighting List as Occasional during Dec - Feb.

Great pictures. Sad that they are so vulnerable.

Lovely series, thanks for sharing this rare bird.

Unfortunately the Short-eared Owl pop has diminished by 71% over the last 40 years. They nest in tall grasses almost always on dry ground...making them vulnerable.
Great Pix, Thank you ,

Dennis- I checked out your site and was sitting jaw dropped ...#18 is awesome!!!
I think this might be the same series? http://www.projectnoah.org/spottings/736...

You do a really nice job. It is kind of like my shooting at the middle of a lake and not realizing until I processed that I had gotten a great Crested Grebe family streaming down the middle of the lake.

Hi Heather, thanks for the nice words! I'm currently shooting with a Canon 7D body and Canon 400mm f5.6L prime lens. I prefer birds at a lot closer distance than this owl was but at the time I didn't know what kind of bird it was for sure, so I took shots even though I knew it was really out of range to get a quality image. With the 7D's 18MP sensor, I have been surprised at how heavily I can crop a shot and still end up with a passable image. These owl images came out better than I thought they would but not as good as I usually strive for. I wanted to share them mostly due to the rarity of this bird at this location, especially at this time of year. I probably would not have posted them if they had been of a common species. If you are interested, you might check out my other spotting of a Short-eared Owl in 2009, which should be in my spottings area on ProjectNoah. I also have a website that includes a gallery and The Blog where I chronicle all my photo shoots, shot by shot, at http://dennisdavenportphotography.com/. Thanks again for your interest in my spottings!

monkey-mind and nana-puppet 8 years ago

Heavy crop is incredibly detailed! What kind of camera/lens are you using? That is an amazing series. I'm learning a lot from your posts - thank you.