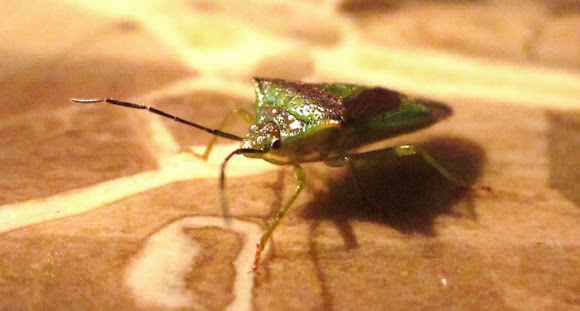 A distinctive species, although confusion with the smaller and less elongate Birch Shieldbug E. interstinctus is possible. The lateral extensions of the pronotum are larger in A. haemorrhoidale, and are marked with red, while the scutellum is green and the abdomen frequently red-tipped. Overwinters as an adult, emerging and mating in the spring. The larvae occur May-October, feeding mainly on hawthorn berries, although a range of other deciduous trees are also used, inlcuding oak, hazel and birch. The new generation is complete from August/September or even later; adults may become darker before hibernation. Common and widespread in mixed woodlands across Europe, Britain and Ireland, becoming scarce in Scotland. Adult: All year Length 13-15 mm ( http://britishbugs.org.uk/heteroptera/Ac... ) ------- The hawthorn shield bug, Acanthosoma haemorrhoidale, is a common European shield bug. Its chief food is haws, the fruit of the hawthorn tree, but adults can overwinter on a diet of leaves, and individuals can be found on many potential food plants, including pedunculate oak, sessile oak and whitebeam. They may grow up to 17 mm long, and are camouflaged in shades of green and brown. Like many so-called "stink bugs", they may release unpleasant odours when disturbed (wikipedia)

The hawthorn shield bug is found across Europe, from Portugal to Russia, and is common in the southern part of Great Britain. Its distribution appears to be spreading north, being only reported as far north as Birmingham in 1892, but having now extended its range to Northern England and even the Scottish Highlands. In Britain and North Western Europe the species is generally active between the months of April and October, although specimens can reappear from hibernation during periods of unseasonable warm weather in the winter. The hawthorn shield bug is a distinctive species, but could be confused with the birch shield bug, Elasmostethus interstinctus

The dark green scutellum band is trapezoidal in shape, and extends from the dorsal pronotum to the forewing hemelytral membrane which accounts for the final third of the main body length. The front wings lie flat without flight, with the scleratized pronotum and corium regions, coloured in a dark red pigmentation. The compound eyes are also pigmented red. There is a speckled pigmentation extending from the upper dorsal throax to the abodomen region. The tarsi are 2-segmented and Antennae 5-segmented. As a heteropteran phytophagyte of mainly green leafed trees and red berries see phytophagous, the species feeds through the anterior section of the rostrum which suctions liquidised plant tissue, semi digested by the delivery of saliva enzymes form the posterior sector of the rostrum. The rostrum beak acts as a modified Proboscis formed by the interlocking of Mandibular and Maxillary stylet into a double tubed elongation covered by the Labium. The structure is needle shaped and penetrates beyond the cuticle and epidermis layer to access the vascular tissue of the mesophyll layer of the leaf. The Rostrum pricks into berries to access fruit sugars. As a stress response, an orange secretion is secreted from gland openings in the thorax ( wikipedia ), ( http://youtu.be/Qdv7MoK7zQg ) clould not upload because of "problems saving"