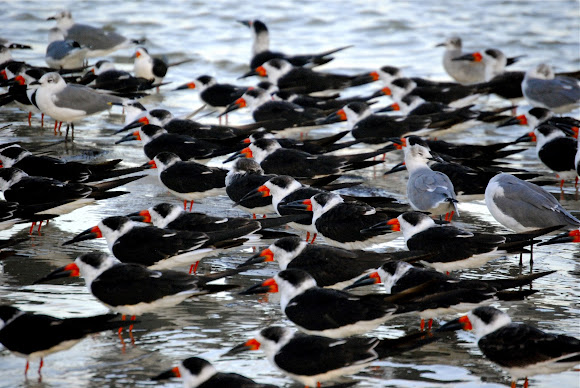 The Black Skimmer is the only Skimmer found in North and South America. It is a black and white tern and has a massive red bill with a black tip. Males are bigger and have larger bills than the females. The lower bill is longer than the upper bill which makes it looks as if it has a big head. No other bird has a lower mandible longer than the upper bill. It has a black crown and white forehead and under parts. Its long pointed wings are longer than its short tail. The Black Skimmer has legs and feet that are red-orange and the feet are webbed. The pupil of the eye is a vertical slit which helps to cut down on the glare of the water during the day and also helps with foraging at night. A juvenile is mottled gray-brown with white scaling above the legs. The forehead and nape of the neck is white; the back of the neck is dark brown. The juvenile’s legs are pale orange and there is black feathering on the back and wings.

Black skimmers, and least, royal and sandwich terns nest in colonies in the open sand on beaches, sandbars, and dredge material islands. Their nests are built on the ground and often consist of simple scrapes in the sand. (Due to habitat loss, a very small percentage of black skimmers also nest on gravel roofs!) Habitat loss from coastal development has reduced the number of suitable nesting spots for black skimmers. Fortunately, the birds have successfully nested on spoil islands and along causeways. On busy beaches, the birds and their nests are extremely vulnerable to human disturbance and to predation by domestic dogs, raccoons and laughing gulls. For these reasons, black skimmers are listed as a Species of Special Concern. Breeding colonies of black skimmers can be found along Florida's Gulf and Atlantic coasts. Watch for them in the early evening when they actively feed, and scan flocks of loafing birds for this uncommon coastal resident.

Breeding & Nesting During courting, the male presents the female with a fish. After she accepts the fish, she holds the fish in her mouth until copulation takes place and then swallows the fish. The Skimmer breeds in colonies on sandbars and beaches of large rivers. They tend to nest near Caspian Terns and other terns. The nest is a scrape in the sand. The pair takes turns scraping the nest, using both feet to kick the sand vigorously backward. The female lays 3-7 eggs directly on the sand, no nesting materials are added to the nest. Incubating the eggs lasts from 21 to 23 days and is done by both parents. They defend the nest by “barking” and posturing. The parents feed the chicks by regurgitation or by dropping food on the ground. The chicks are able to pick up food on the ground because when they hatch their lower beak is the same length as the upper one. This will change at around one month the lower is beak becomes longer than the upper. When chicks begin to leave the nest, they may hide from predators by scraping a depression in the sand and kicking up sand to cover up. They will also do this to cool off on hot days. The chicks fledge in about 24 days. - http://www.birdinginformation.com/birds/...

Wow! pretty colours, lovely series and great information and Video. Thanks for sharing.

Your photos and video and information are wonderful! I have never seen this bird and hope to someday.

It IS cool how they all face the same way. Love the beaks. Excellent photos and video!

Thank you, Michael. It was.

really nice,,must have been a great moment

Thank you, Sachin Zaveri and Longmustache for your nice comments!

Wow.. Great job! Thanks for sharing. The video is impressive!

It was interesting to see how they commune with each other and with sea gulls. I love how they all face the same way.