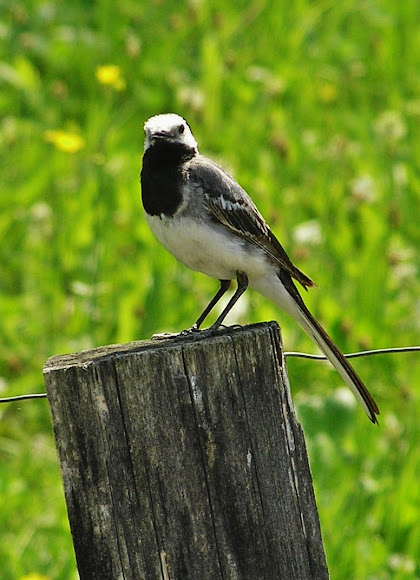 This is a slender bird, 16.5–19 cm (6½–7½ in) in length (East Asian subspecies are longer, to 21 cm (8¼ in), with the characteristic long, constantly wagging tail of its genus. The nominate subspecies Motacilla alba alba is basically grey above and white below, with a white face, black cap and black throat. There are a number of other subspecies, some of which may have arisen because of partial geographical isolation, such as the resident British form, the Pied Wagtail M. a. yarrellii, which now also breeds in adjacent areas of the neighbouring European mainland. Pied Wagtail, named for naturalist William Yarrell, exchanges the grey colour of the nominate form with black (or very dark grey in females), but is otherwise identical in its behaviour. Other subspecies, the validity of some of which is questionable, differ in the colour of the wings, back, and head, or other features. Some races show sexual dimorphism during the breeding season. As many as six subspecies may be present in the wintering ground in India or Southeast Asia and here they can be difficult to distinguish.[10][11][12][13] Phylogenetic studies using mtDNA suggest that some morphological features have evolved more than once including the back and chin colour. Breeding M. a. yarrellii look much like the nominate race except for the black back, and M. a. alboides of the Himalayas differs from the Central Asian M. a. personata only by its black back. M. a. personata has been recorded breeding in the Siddar Valley of Kashmir of the Western Himalayas.[14] It has also been noted that both back and chin change colour during the pre-basic moult; all black-throated subspecies develop white chins and throats in winter and some black-backed birds are grey-backed in winter.[6][10] The call of the White Wagtail is a sharp chisick, slightly softer than the version given by Pied Wagtail. The song is a pleasant twittering, more regular in White than Pied, but with little territorial significance, since the male uses a series of contact calls to attract the female (Wiki)