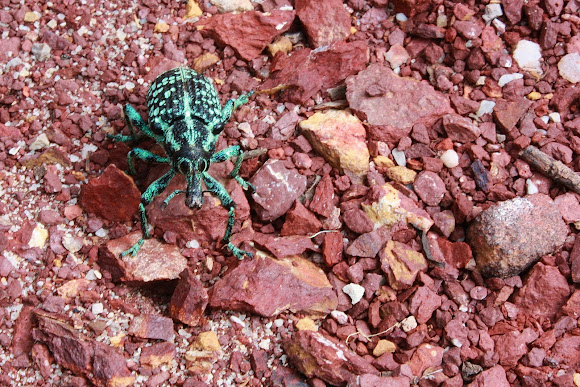 The body of Chrysolopus spectabilis is an elongated oval 15–25 millimetres (0.6–1.0 in) long. The elytra are black, with irregular spots of bright metallic green. The underside of the body is shaded in matt green, and a white or green line runs the length of the animal's sides. The head, thorax and legs are black with occasional metallic green markings. The colouration varies across the year, with animals emerging later in the season having a bluer colour.

Adults are active both in daytime and at night, mostly during the warmer months (November–March). During this period, C. spectabilis is often seen in built-up areas and woodlands in areas with moderate precipitation, particularly around Acacia plants. In open areas, such as northern New South Wales, Acacia species with phyllodia (flattened leaf petioles) are preferred, but in more wooded areas, such as the Blue Mountains, species with paripinnate leaves are preferred. Adult beetles have been recorded on 28 Acacia species, out of the 1000 species present in Australia; the larvae, on the other hand, have only been recorded on seven species. The larvae are, however, thought to feed on the same species as the adults.

Thanks for the ID Steve.

Seems like a weevil that has a fluorescence ability.