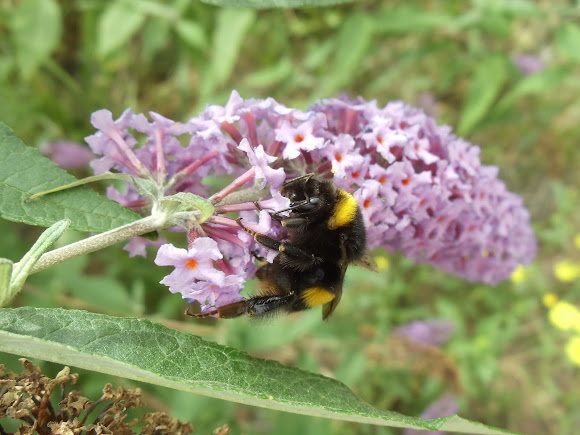 A common and large bumblebee in europe. The queens are the only type of bumble bee known to hibernate at winter time. It is covered in short black hairs with a bright yellow band running across the thorax and one midway of the abdomen. The tip of the abdomen is the name sake buff colour in queens and white in drones and workers queens are also noticeably larger.

Forms underground nests/hives made of wax in abandoned tunnels and dens left by small mammals.

The first few pictures I believe, are of a queen which is quite rare to see! (for me at least). The last two are of the worker bees note the difference in colouration. It was considerably larger than most bumblebees that would visit and behaved differently as well. Most bees, when approached for a picture or just on routine foraging will stop at one these flower bunches collect pollen and fly off soon after; this one however stayed and inspected each individual flower and drank nectar and payed me know mind what-so-ever, regardless of how close I got the camera to it (to my thrill and surprise) allowing for some good macro photography. Upon later inspection of the pictures and research I noticed that the abdomen hairs (tail) was a buff colour indicating a queen and not a drone or worker. This one seemed to be building her reserves for winter.