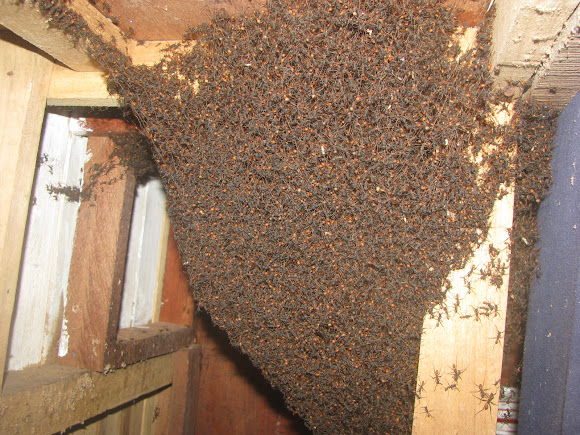 Frequently seen on the jungles around Tortuguero, and a common sight at Cano Palma Biological Station. During the heavy rains in July of 2012, this bivouac and several smaller ones were made in our kitchen. We had to move the queen after 4 days, to get them to relocate.

you have an unique collections manu, just go ahead !

Thanks Manuel. I just can't believe you were brave enough to open that up and fish around for the queen! And find her besides! Wow.

Manuel, let me just say all of us ladies are quite impressed you did this, mostly because I don't think any of us could bring ourselves to do it! And also quite impressed you waited a few days before doing it, and that you were more concerned with moving them than killing them all. Kudos to you, sir :)

LaurenZarate - I didn't get photos of the queen as my wife had the camera at work when I moved them. I suspect that the ants that were clustered with her used pheromone trails to lead the others back to her - I didn't move them far away. suzmonk - I definitely didn't know what I was doing

Thank you so much for answering, we all have so many questions on your gorgeous spotting. I love the way you handled it... it shows how much you cared... : )

Truly amazing that this came into your kitchen! What a marvelous and equally scary thing to see. Do you more photos you could add? Did you photograph the queen? How did the mass find her when you moved her?

Very, very interesting ... I'm sure I would have been too intimidated, but you knew just what to do.

Gilma Jeannette Ospino Ferreira-Norman - we didn't take her far, and there were other ants with her as we moved her (mostly attacking!) The entire swarm of ants left immediately, and took her with them.

And do the ants go find the Queen?

suzmonk we used long handled tongs to part the mass and went for the center. There was some biting. Ava T-B, we only removed them because we had a 2 year old and had to sweep a path to get to the bathroom. And the smell...and that we hadn't been able to cook for 4 days...

How do you find the queen and relocate her?

WOW!! That is incredible!! I wouldn't be able to be so patient.... I get armies of the large black ants come through my property and home but it only last a few hours, once they eat all the insects they leave.... : o

You are so kind to have let them stay for 4 days before relocating their queen!

That's an incredible organism when it's all working together.