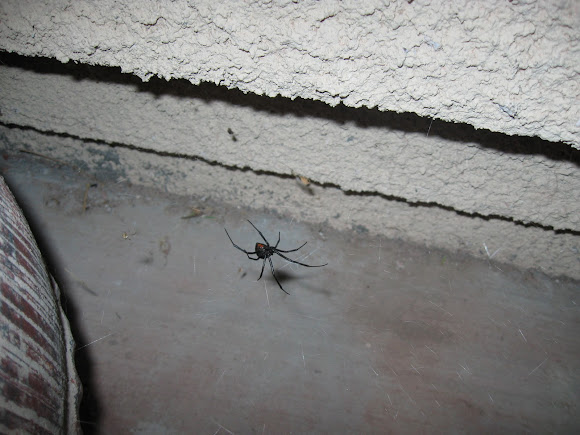 Not all adult female black widows exhibit the red hourglass on their abdomen—some may have a pair of red spots or have no marking at all, but any markings that are present are bright red. Adult male black widows are a quarter the size of the female, and are usually gray or brown rather than black and red; while they may sometimes have an hourglass marking on their abdomen, it is usually yellow or white, not red. The bite of a male black widow is not considered dangerous to humans; it is the bite of the adult female black widow from her much larger venom sacs that has given this spider its dangerous reputation. While there is great variation in specifics by species and by gender, any spider exhibiting a red hourglass on the abdomen and having a shiny black body is an adult female black widow. Spiders of the genus Steatoda (also of the Theridiidae family) are often mistaken for widow spiders, and are known as "false widow spiders"; they are significantly less harmful to humans. In common with other members of the Theridiidae family, the widow spiders construct a web of irregular, tangled, sticky silken fibers. The spider very frequently hangs upside down near the center of its web and waits for insects to blunder in and get stuck. Then, before the insect can extricate itself, the spider rushes over to bite it and wrap it in silk. If the spider perceives a threat, it will quickly let itself down to the ground on a safety line of silk. As other web-weavers, these spiders have very poor eyesight and depend on vibrations reaching them through their webs to find trapped prey or warn them of larger threats. While there are some more aggressive species, most are not; many injuries to humans are due to defensive bites delivered when a spider gets unintentionally squeezed or pinched. Some bites are thought to result from a spider mistaking a finger thrust into its web for its normal prey[citation needed], or in cases where a female is protecting an egg sac, but ordinarily intrusion by any large creature will cause these spiders to flee.

This lovely female used to live just outside my front door. It was just by chance I caught the male there too.