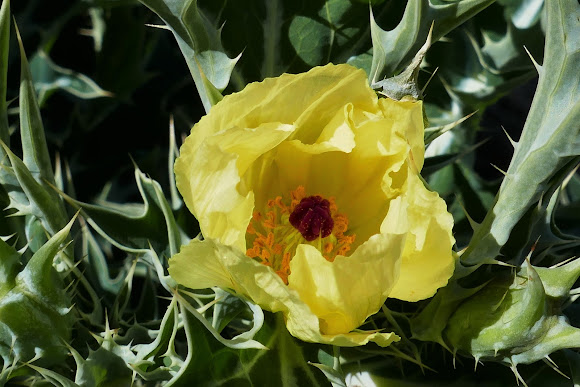 Despite its pretty flower and cool name, this is a truly anti-social plant and is considered an invasive species in Australia. Also known locally as Prickly Poppy, it is now a naturalised species in this country, as it is in many others around the world as well. A native to Mexico, it is a prickly glaucous herb with variegated leaves, and usually grows up to 35-40 cm tall; young stem whitish purple or violaceous, fading with age. It has a bright yellow flower, and though poisonous to grazing animals, is rarely eaten. The reference link provides plenty of information.

An extremely hardy pioneer plant, it is tolerant of drought and poor soil, often being the only cover on new road cuttings or verges. That was definitely the case with this spotting; found roadside, poor soil, drought conditions, full sun exposure and blistering heat. Spotting location was at the Alf Williams Bridge, which crosses the Brisbane River at Gregors Creek. This is a rural area.

It never ceases to amaze me how many invasive species end up becoming naturalised species. List of flora naturalised in Australia: https://en.wikipedia.org/wiki/Category:F... Despite its toxicity, however, this is a very useful plant in traditional medicine, plus biodiesel production from A. mexicana seed oil using crystalline manganese carbonate has also been demonstrated.