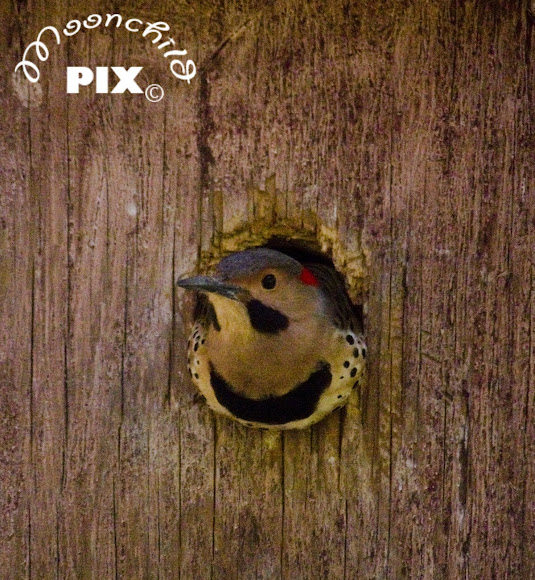 Alabama's state bird.The back of the male of the common flicker is a gray-brown color with broken black bars on the body feathers and with the yellow shafts of the flight feathers partly visible. The rump patch is white and the two-pointed tail is mainly black. The crown and back of the neck is gray with a red band at the nape. The cheeks are pinkish-buff with a black "moustache" and bib below the chin on the throat. The underparts are creamy with many, irregular black spots. The undersides of the wings and tail are bright yellow. The female differs from the male in that she does not have the "moustache". Both sexes have gray legs, a dark gray bill and dark brown eyes. The talons are quite sharp. This helps the bird to easily perch on vertical tree trunks.

The common flicker is found throughout Alabama and is present all the months of the year. It is one of the more common woodpeckers. Other races of the flicker are found over all of the North American Continent. The common flicker breeds from the tree line in Canada and Alaska south and eastward. This range lies generally east of the Rocky Mountains to the Gulf of Mexico and Atlantic Ocean. Some flickers winter along the Canadian border, but the majority migrate southeastward and winter in the United States.

The common flicker is the State Bird of Alabama. Alabama has been known as the "Yellowhammer State" since the Civil War. The yellowhammer nickname was applied to the Confederate soldiers from Alabama when a company of young cavalry soldiers from Huntsville, under the command of Rev. D.C. Kelly, arrived at Hopkinsville, KY, where Gen. Forrest's troops were stationed. The officers and men of the Huntsville company wore fine, new uniforms, whereas the soldiers who had long been on the battlefields were dressed in faded, worn uniforms. On the sleeves, collars and coattails of the new calvary troop were bits of brilliant yellow cloth. As the company rode past Company A , Will Arnett cried out in greeting "Yellowhammer, Yellowhammer, flicker, flicker!" The greeting brought a roar of laughter from the men and from that moment the Huntsville soldiers were spoken of as the "yellowhammer company." The term quickly spread throughout the Confederate Army and all Alabama troops were referred to unofficially as the "Yellowhammers." When the Confederate Veterans in Alabama were organized they took pride in being referred to as the "Yellowhammers" and wore a yellowhammer feather in their caps or lapels during reunions. A bill introduced in the 1927 legislature by Representative Thomas E. Martin, Montgomery County, was passed and approved by Governor Bibb Graves on September 6, 1927.