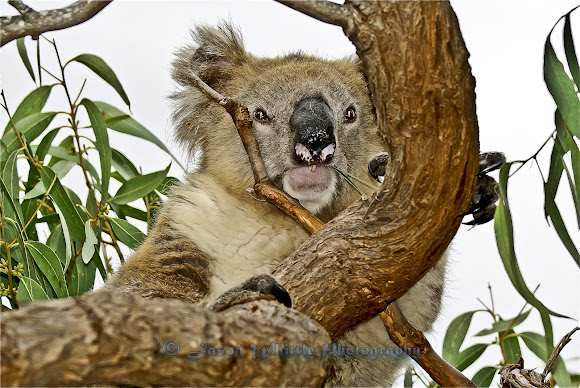 Aussie Bear! NAAaa! The Australian Koala Bear. The koala (Phascolarctos cinereus) is an arboreal herbivorous marsupial native to Australia, and the only extant representative of the family Phascolarctidae. The koala is found in coastal regions of eastern and southern Australia, from Adelaide to the southern part of Cape York Peninsula. Populations also extend for considerable distances inland in regions with enough moisture to support suitable woodlands.

Up only a certain tree chewing away on there greens leaves. These ones are out at a camping grounds called Mickera Station. Known for there Koala's.

such unique creature, thank you for sharing Jason!

So cute! I like the second picture the best also:)

Looks like he is yelling at you in the first pictur. I like the second the best! Nice to see him in a Natural enviroment.