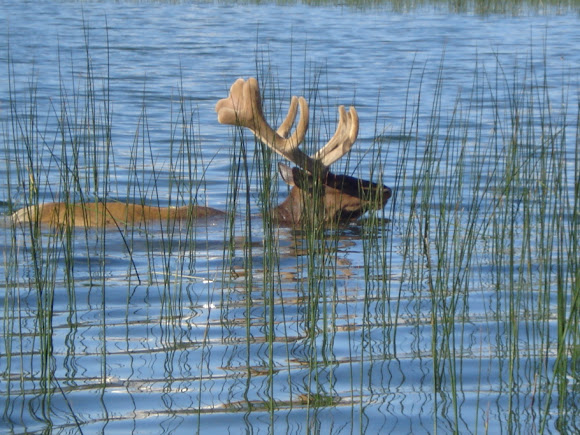 Description: -Variation- Cows (females) average 300lbs and stand 1.3m tall while the Bulls (males) average 710 lbs and 1.5m tall. This is average. An Alaskan Roosevelt Elk are estimated to weigh around 1,300lbs! Subspecies living in arid climates tend to have lighter colored coats than do those living in forests. Another variation is that only males have antlers (which are made of bone and can grow 2.5cm a day!) - Elk share an environment with bears, coyotes and wolves - Parelaphostrongylus tenuis (brainworm or meningeal worm) is a parasitic nematode known to affect the spinal cord and brain tissue of elk and other species, leading to death. This is a parasitic relationship -During the fall, elk grow a thicker coat of hair, which helps to insulate them during the winter. By early summer, the heavy winter coat has been shed, and elk are known to rub against trees and other objects to help remove hair from their bodies. Subspecies living in arid climates tend to have lighter colored coats than do those living in forests.[21] Most have lighter yellow-brown to orange-brown coats in contrast to dark brown hair on the head, neck, and legs during the summer. -Elk reproduce sexually. Adult elk usually stay in single-sex groups for most of the year. During the mating period known as the rut, mature bulls compete for the attentions of the cows and will try to defend females in their harem.Female elk have a short estrus cycle of only a day or two, and matings usually involve a dozen or more attempts. By the autumn of their second year, females can produce one and, very rarely, two offspring, although reproduction is most common when cows weigh at least 200 kilograms (440 lb).

Elk range in forest and forest-edge habitat, feeding on grasses, plants, leaves, and bark. Although native to North America and Eastern Asia, they have adapted well to countries where they have been introduced, including Argentina, Australia, and New Zealand. Their great adaptability may threaten endemic species and ecosystems into which they have been introduced.As is true for many species of deer, especially those in mountainous regions, elk migrate into areas of higher altitude in the spring, following the retreating snows, and the opposite direction in the fall. Hunting pressure also impacts migration and movements.[33] During the winter, they favor wooded areas and sheltered valleys for protection from the wind and availability of tree bark to eat. Roosevelt elk are generally non-migratory due to less seasonal variability of food sources.