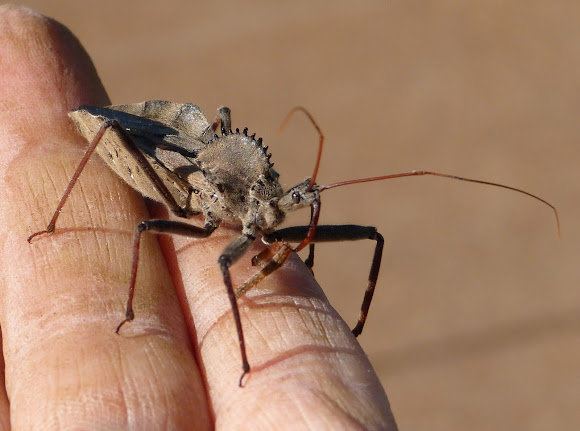 The wheel bug (Arilus cristatus), in the family Reduviidae, is one of the largest terrestrial true bugs in North America, being up to 1.5 inches, or 38 mm, in length; it is the only member of its genus. A characteristic structure is the wheel-shaped pronotal armor. They are predators upon soft-bodied insects such as caterpillars, Japanese beetles, etc., which they pierce with their beak to inject salivary fluids that dissolve soft tissue. Because most of their prey are pests, wheel bugs are considered beneficial insects, although they can inflict a painful bite if handled carelessly. Wheel bugs are common in eastern North America, although many people in the region have never seen them. They are camouflaged and very shy, hiding whenever possible. They have membranous wings, allowing for clumsy, noisy flight which can easily be mistaken for the flight of a large grasshopper. The adult is gray to brownish gray in color and black shortly after molting, but the nymphs (which do not yet have the wheel-shaped structure) have bright red or orange abdomen The wheel bug has characteristic dorsal armor, shaped like a wheel or cog. It moves and flies slowly, and in flight produces a noisy buzzing sound. It has one of the most developed set of mouth parts among true bugs. Its beak arises from the anterior end of its long, tubular head and unfolds forward. The bug plunges its beak into its victim, pinning its prey with its front legs. It then injects enzymes into the victim, paralyzing it and dissolving its insides, and proceeds to drain all of the victim's bodily fluids. The bite of a wheel bug is painful and may take months to heal (sometimes leaving a small scar), so caution is highly advised when handling them. The wheel bug is also noted to be very vicious in the wild, and cannibalistic behaviors between them have been noted; for example, nymphs may prey on nymphs and the female may feed on the male after mating is concluded.

I spotted a flash of gold glistening in the sun & found this little guy when I went to investigate. The photos really don't do justice to it's amazing gold back (see second photo). He seemed completely unfazed at being handled & happily posed for several minutes, but now I have discovered these guys can inflict a very painful bite, I will probably leave them alone in future!

Thanks Sachin! They are one of my favorites! I actually found the first adult this year this morning so it's nice to be reminded of my last encounter - i didn't pick this one up though now that I know they have a very painful bite!

Annvan you are probably right, I always try to be gentle with the various critters I pick up.
Thanks textless!

As a Brit myself Craig, I've got kind of used to handling all sorts of bugs & I tend to forget that there are aggressive & poisonous critters here!

Yes, thanks for all that interesting info! After reading that now I think your coming to no harm was more due to your careful handling than to the bug's friendliness per se. :-)

New to me. I guess we don't have these in the UK. That was really interesting; thanks for a great intro. to really cool bug!

Thanks Guys! Yes, I'm very happy he was chilled about being picked up! I'm usually pretty lucky about not getting bitten or stung but it's bound to happen eventually!
Carol, how funny - they are slow fliers so maybe he traveled SouthWest!

Really great photo series! And wow I'm glad he was in a friendly mood and you came to no harm!!

Looks exactly like mine! EXACTLY! It got too cold here and I told him to visit you for the winter. HA!

If they "sting" you, it takes up to six months for the wound to heal. Be careful.

It was on the steps to our front porch but the shadows were distracting so I picked it up for better lighting - I just put my hand in front of him & he obligingly walked on!

Ouch! You should bring a glove with you next time! I hope to find one of these beauties someday. What was it on when you saw it?