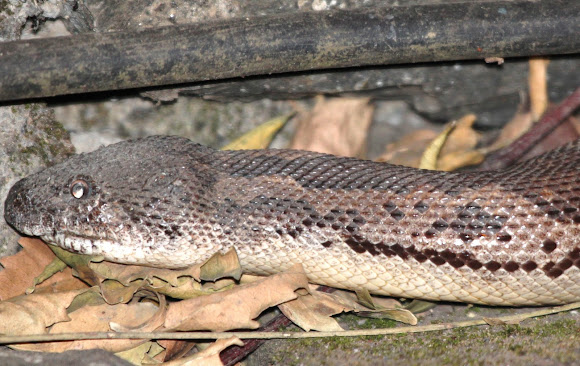 Head covered with small scales. The eye is very small with vertical pupil. Scales very small, smooth or keeled. Tail very short and blunt, not or but very slightly prehensile. The anterior scales are only feebly keeled, but these increase in size posteriorly to the point that they become so heavily keeled that it can make a squirming specimen really painful to handle. This also makes it look as if the front and rear ends belong to markedly different animals. In India it can be mistaken at first glance for either the Indian python, Python m. molurus, or the deadly Russell's viper, Daboia russelii. Active at night, it feeds on worms and small mammals.

Found in eastern Pakistan, India south of about 30°N latitude, and in the northern arid region of Sri Lanka. Sandy tracts of central and southern India, the Punjab, Kachchh and Sind.It is also found in Meghalya.

This unlucky, 6 feet long fellow was spotted by our guards of the society at night. They were about to kill it when I reached the gate. I made them stop and clicked some photographs. Later I made them understand not to kill it. They agreed but when they used bamboo to lift it, they could not lift and the snake was getting angry so I suggested that they must use rods instead. After some time the guards put it in a nearby grassland. Unluckily enough, the snake came on the road and was killed under a truck.

your are welcome sir:)

Thanks for your time and suggestion Gopal! I really appreciate it. Just wanted to to make sure that I have the correct ID. Hope you will understand :-)

SatyenMehta sir its distributed in entire Indian subcontinent except northeast and Kashmir sir. it can be easily distinguished with python where it has entirely smooth scaled sand boa has rough keeled scales which can be distinguished in the following picture sir.
http://www.nationalgeographicstock.com/n...
http://www.snakesnadders.org/photoalbum/...

Hi Gopal! Thanks for the suggestion. I just read on Wiki that the suggested species is found at: "Sandy tracts of central and southern India, the Punjab, Kachchh and Sind.It is also found in Meghalya." I have seen it in Western India. Can you confirm?

Yeah it is fun. Atul Sir's profession is too good. If we mess with him he breaks our teeth. Kidding.

Well endeavor by your end Satyen

He is a doc (Dentist) and I run a family business of thickeners.

Ha haha no Emma I am not satyens boss we are good friends ,sir is just the way we call each other.its like ,atul sir ....satyen sir...

Is Atul your boss?

Thanks Daniele and Emma for appreciating the efforts. It would have been better if I knew a snake catcher around who could catch them and leave them in the wild. Already searching for future references.