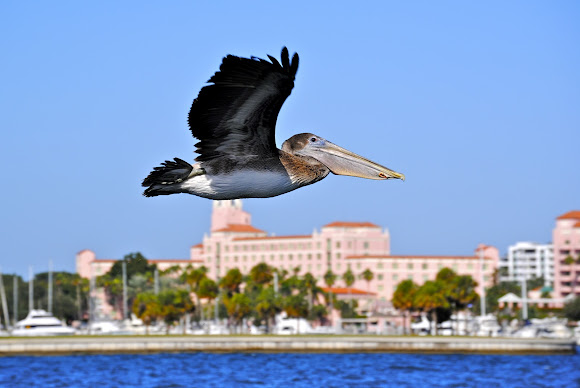 The brown pelican, Pelecanus occidentalis, is characterized by an extremely large gray bill, pale yellow eyes, black legs and feet, and an unfeathered black throat pouch (e.g. Terres 1980; Farrand 1983). Plumage coloration varies with age and season, and descriptions are divided accordingly below. Both sexes exhibit identical coloration at each phase. Juvenile/Immature Plumage is mostly brown above, blending to a white breast and underparts (Farrand 1983; Harrison 1996). Adult plumage is acquired by the third year.

Populations are found around beaches, bays and a variety of habitats in tidal estuaries (Farrand 1983). Brown pelicans are rarely seen inland except accidentally as the result of hurricanes and other strong storms (Terres 1980).

This pelican was flying around The Pier in St. Petersburg, Florida by the Tampa Bay.

Thank you very much, Saarbrigger.

Thanks for the nice comments!

Thank you all for such positive feedback!

LOVE the colors in this series. Great job!

Only a few photos make me want to weep. (A good thing) HA! This series ... well, so great. It was a pleasure viewing them.