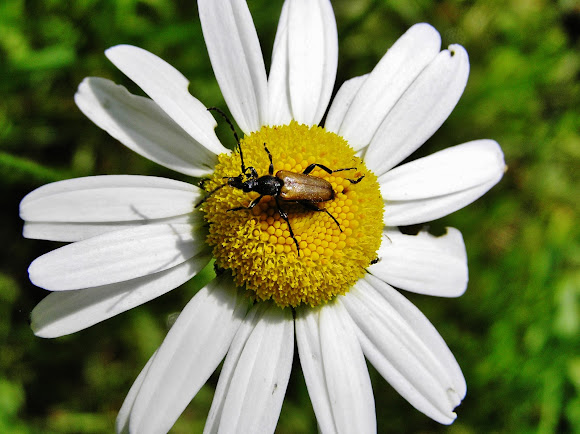 The fairy-ring longhorn beetle, is a beetle species of flower longhorns belonging to the family Cerambycidae, subfamily Lepturinae. P. Livida – mating pair This beetle is widespread in most of Europe, in East Palearctic ecozone and in the Near East. Habitat of larvae is the forest floor of pine forests. They do not develop in dead wood, as usual in many species of Cerambycidae, but in humus infested by fungus Marasmius oreades, feeding on mycelium. The adults grow up to 5–9 millimetres (0.20–0.35 in) and can be encountered from May through September, completing their life cycle in two years. The head and pronotum are black, while elytra are reddish-brown, covered with fine hair. The antennae are slightly shorter than the body. The adults are very common flower-visitors, especially Apiaceae species, feeding on pollen and the nectar.

Add to a mission