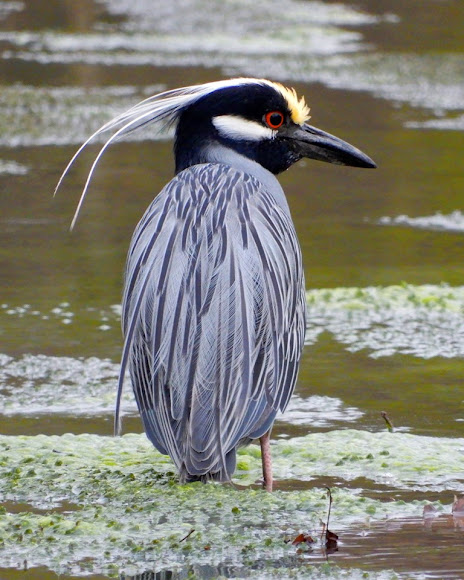 The yellow-crowned night heron looks for shallow water to live in: marshes, wooded swamps, and lakeshores for inland populations, and thickets, mangroves and cliff-bound coasts for coastal populations. It can also be found in areas that don’t always have enough water, but that get flooded on a regular basis. Its habitat is closely linked to that of the crustaceans that make for most of its diet, and it tolerates fresh water, brackish water and saltwater. Another important habitat factor is nesting sites. The yellow-crowned night heron needs bushes or trees to build nests, although it will use rock ledges where vegetation is unavailable (for example, on cliffs). Unlike the black-crowned night heron, the yellow-crowned does not mind living near humans and can be found in wooded neighborhoods, nesting on rooftops and driveways. Such cohabitation may not go smoothly and can create conflicts with humans

Thank you. I must admit I was surprised to see this guy enjoying himself "fishing" in that spring water. It definitely did not smell that good to the human nose....