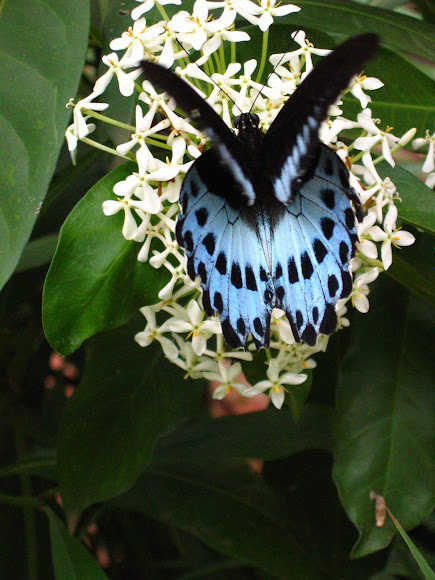 Males have the upper wings rich velvety black. The fore wing has a postdiscal band composed of internervular broad blue streaks gradually shortened and obsolescent anteriorly, not extended beyond interspace 6 Female very similar but the inter-nervular streaks on the fore wing paler, extended into the cell both on the upper and undersides. Hind wing: the pale blue area on the upperside and the corresponding grey area on the underside paler. In some specimens there is a diffuse short crimson streak at the base of the cell of the fore wing on the upperside.

The butterfly is most common in heavy rainfall areas, such as evergreen forests. Also common in deciduous forests and wooded urban areas, primarily due to the cultivation of its host plants, i.e. the Citrus species.

Thanks Carol, identifying is really the tuff part, once you have that, there is plenty of info out there and that gives the picture a lot more meaning, glad you enjoyed it and you have some really great pictures. Cheers !

Lovely, and I am impressed all the research information you give. Excellent!