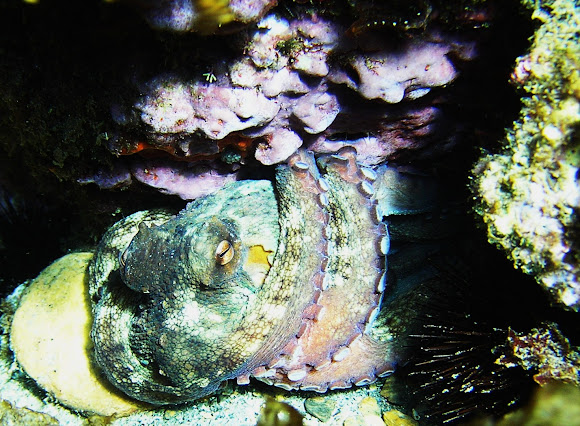 Octopuses are characterized by their eight arms, usually bearing suction cups. The arms of octopuses are often distinguished from the pair of feeding tentacles found in squid and cuttlefish.[4] Both types of limbs are muscular hydrostats. Unlike most other cephalopods, the majority of octopuses – those in the suborder most commonly known, Incirrina – have almost entirely soft bodies with no internal skeleton. They have neither a protective outer shell like the nautilus, nor any vestige of an internal shell or bones, like cuttlefish or squid. A beak, similar in shape to a parrot's beak, is the only hard part of their body. This enables them to squeeze through very narrow slits between underwater rocks, which is very helpful when they are fleeing from morays or other predatory fish. The octopuses in the less familiar Cirrina suborder have two fins and an internal shell, generally reducing their ability to squeeze into small spaces. These cirrate species are often free-swimming and live in deep-water habitats, while incirrate octopus species are found in reefs and other shallower seafloor habitats. (Wiki)

Found this Octo when i was diving on the spanish coast. I think he was not really happy about my visit :-)