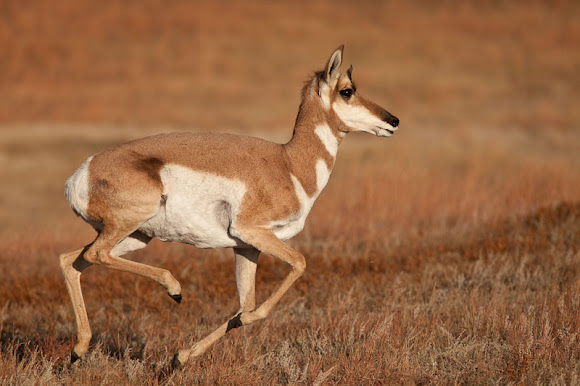 Pronghorns are fast mammals of America's western prairies and deserts. Males may weigh 36–70 kg (79–150 lb) (second photo). Females weight slightly less (first photo). They have beautiful brown and white marked coats. Males have interesting horns. While they are branched, they are not considered antlers. Another oddity about pronghorns is that they shed the outer horn sheath, again not very horn-like as horns are never shed.

Pronghorns are also called antelope, but that is inappropriate as they are not antelopes or even closely allied to antelope. They are the fastest land mammal in North America reaching speeds of up to 60 miles per hour (about 86 km/hour). They may be the second fastest land mammal in the world, being bested only by the cheetah. Interestingly, there is no land predator within their range that would require this speed to escape. It's thought that the pronghorn may have evolved to escape the American cheetah, which is now extinct. I once was driving across Montana, many years ago, when I looked out the side window and found a herd of eight pronghorns keeping pace with my speed. I glanced at the speedometer and discovered I was driving about 65 mph. Up ahead was a three strand barbed wire fence that they would have to cross if they continued on their present course. Pronghorns never evolved a strategy of jumping fences and when they approached the fence I was amazed to see them to tuck their noses low and between their outstretched front legs and zip through the fence at full speed! There was an enormous puffs of hair as they in turn went through the fence. But they emerged, still at full speed, apparently unscathed.

Thanks everyone for your kind comments. The running pronghorn was a member of a small herd of eight animals. I had parked the car at a pullout and was watching them when they turned and ran past me one at a time. The direction they took was perfect quickly closing the 300 or so meters and ran past me about 30 meters away. The light was right, the camera was set correctly and they cooperated perfectly....grin. It doesn't get any better than that.

spectacular! don't know why i didn't come across this sooner~

My favorite places to see pronghorns is Custer State Park (South Dakota) and the adjoining Wind Cave National Park. The pronghorns in these two places are habituated to people and plentiful. Another fairly good place is the northwest corner of Yellowstone National Park in Wyoming near Mammoth townsite.

I tried looking for one when I went to Grand Canyon but didn't see any. Lucky for you to have spotted them. Congrats!

Wonderful, I saw some of them in Colorado....

How did you click these images, I thought even cheetah couldn't outrun him most of the time. Just kidding, they are beautiful, just keep on it.

Congratulations, Gordon. Your photos are wonderful

Congratulations Gordon! This great shot has earned Spotting of the Day on Day 3 of the National Wildlife Federation's Wildlife Week. Today we are highlighting wildlife that are record breakers.

"As the National Wildlife Federation's Wildlife Week roars on, we're continuing to spotlight some incredible animals. Today, we're showing off wildlife that are record breakers. The Pronghorn runs with its mouth open, not from exhaustion but to take in extra oxygen as it is the second fastest mammal on the planet right behind the cheetah. It can, however, sustain high speeds longer than cheetahs. Now that's wild! "

Thanks. They are amazing animals. This one was running uphill to join other members of its herd that were grazing above me. I've watched pronghorns for hours and never get tired of watching them.