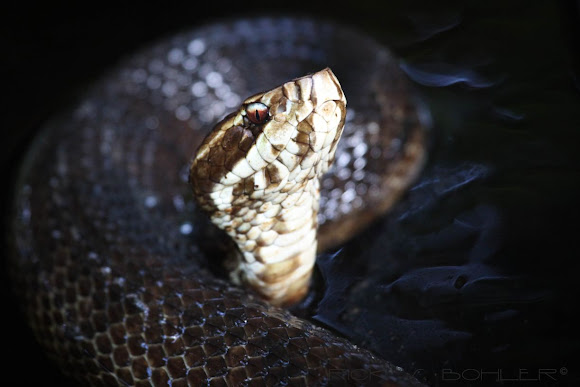 Cottonmouths are venomous semi-aquatic snakes often referred to as “water moccasins.” They have large, triangular heads with a dark line through the eye, elliptical pupils, and large jowls due to the venom glands. They are large – typically 24 - 48 in (61 - 122 cm), occassionally larger, keeled-scaled, heavy-bodied snakes. Their coloration is highly variable: they can be beautifully marked with dark crossbands on a brown and yellow ground color or completely brown or black. Older adults are often dark and solid-colored whereas the juveniles are brightly patterned with a sulphur yellow tail tip that they wiggle to attract prey. The belly typically has dark and brownish-yellow blotches with the underside of the tail being black. As pit-vipers they have facial pits that sense heat and are used to detect prey and predators. Male cottonmouths are larger than females.

Cottonmouths range throughout the Southeast, north to southeastern Virginia. In our region cottonmouths are generally restricted to the Coastal Plain but are found in a few Piedmont locations west of Atlanta, Georgia. They can be found in nearly all freshwater habitats but are most common in cypress swamps, river floodplains, and heavily-vegetated wetlands. Cottonmouths will venture overland and are sometimes found far from permanent water. Cottonmouths often congregate around drying pools in wetlands to feed on trapped fish and amphibians.

Cottonmouths are fairly common and are not listed at the state, federal, or heritage level. However, in many parts of their range they are killed by humans. Cottonmouths travel overland and will migrate between areas in response to drought. Therefore, they are especially vulnerable to the threats of habitat loss and fragmentation. If you keep your distance from Cottonmouths, they have nothing to gain by attracting your attention. They’d rather you don’t even notice them. Even if you were to harass one of these animals, their first instinct is not to bite, but to flash their namesake white mouths to warn you. Yet, some of the most pervasive myths about Cottonmouths concern their alleged aggression and tendency to approach, attack, or even chase people!

Just walking in the woods :)

How did u find him?