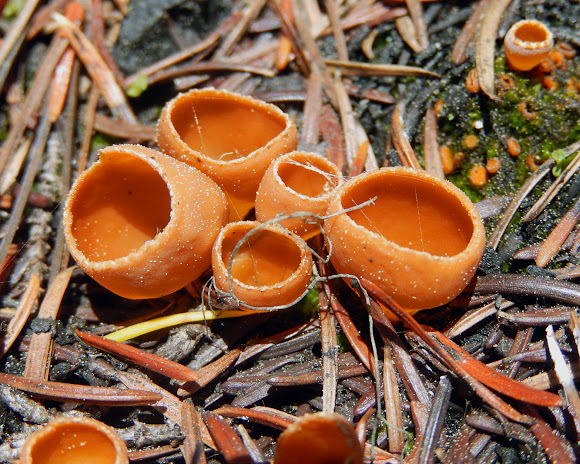 Orange Peel Fungus spotted along a hiking trail in the Willamette National Forest, Oregon. This was seen along the "waterfall trail" that leads from Koosah Falls to Sahalie Falls.

The orange peel fungus grows on bare clay or disturbed soil throughout North America and Europe (fairly common find in Britain and Ireland, and throughout mainland Europe, from Scandinavia right down to the southern shores of the Iberian Peninsula). It has also been found in the south of Chile.

The brilliant orange, cup-shaped ascocarps often resemble orange peels strewn on the ground, giving this species its common name. Additionally, this is one of the very few common cup fungi that are edible; most of the others are in varying degrees poisonous, although some become edible if thoroughly cooked. Unfortunately, despite its attractive appearance, the Orange Peel Fungus is not particularly tasty, and so it is rarely used in cooking except perhaps to add color to salads.