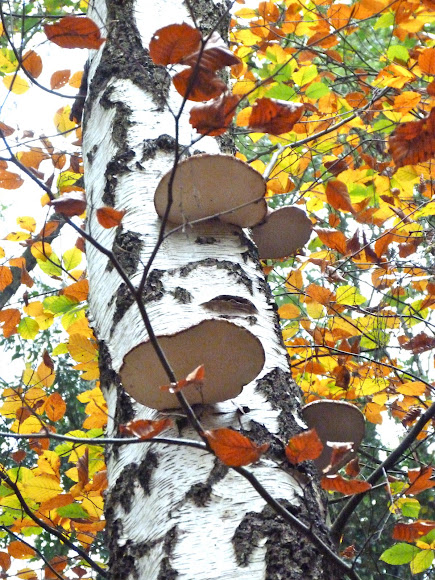 One of the most common polyporous bracket fungi and, as the name suggests, it grows almost exclusively on birch trees. The brackets burst out from the bark of the tree, and these fruiting bodies can last for more than a year. Technically, it is an edible mushroom, with a strong, pleasant "mushroomy" odor but a bitter taste. It is said to have medicinal properties, and the velvety cut surface of the fruiting body were used as a strop for finishing the finest of edges on razors. Dried specimens have also been used as tinder, and this fungus was carried by "Ötzi the Iceman" – the 5,000 year old mummy found in Tyrol.

Woods behind my UK home.

I absolutely LOVE the first shot especially!! The white birch and the colours of the leaves all around... so picturesque!! : )

Thanks everyone for your kind comments!

Seen again now, this is a striking photo!

This is a beautiful shot! Wow!