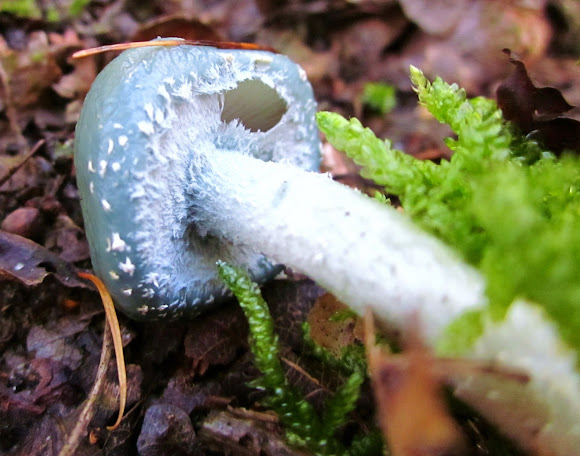 The cap is convex, broadening, and becoming umbonate with age. It is from 2–8 cm in diameter. At first it is a vivid blue/green, and very glutinous (slimy), with a sprinkling of white veil remnants around the edge. The colour in the gluten fades, or is washed off as it matures, and it becomes yellow ocher, sometimes in patches, but mostly at the centre. Finally, it will lose the blue-green coloration completely. The stem is quite long and of uniform thickness. It has a fragile brown/black ring, and below this the stem is covered in fine white scales, or flakes. The gills are initially white, then clay-brown, and sometimes have a white edge. The spore print is brownish-purple, and the oval spores 7–10 x 5 μm

This mushroom is common in grassy woods, and on roadside verges in Britain, Europe, Asia (Iran) and parts of North America, growing on rotting wood. It particularly favours wood-chip mulches in gardens, and parks

Stropharia aeruginosa, commonly known as the verdigris agaric, is a medium-sized green, slimy woodland mushroom, found on lawns, mulch and woodland from spring to autumn. It is deemed poisonous by some authorities, although effects are little known and its toxic constituents undescribed ------ Similar species : Stropharia aeruginosa is darker blue-green and its cap scales are persistent; it has reddish-brown gills with white edges; it is much less common than Stropharia caerulea.