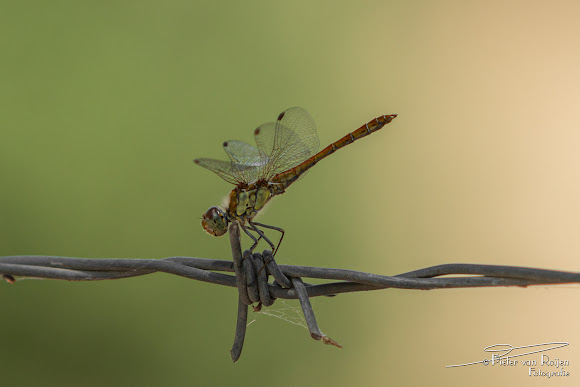 Sympetrum fonscolombii can reach a body length of 38–40 millimetres (1.5–1.6 in). This species is similar to other Sympetrum species but a good view with binoculars should give a positive identification, especially with a male. Males have a red abdomen, redder than many other Sympetrum species. The frons and the thorax are red-brown. The eyes are brown above and blue/grey below. The wings have red veins and the wing bases of the hind-wings are yellow.The pterostigma is pale yellow with a border of black veins. Female are similar but the abdomen is ochre yellow, not red, with two black lines along each side. The wings have yellow veins at the costa, leading edge and base, not red veins as found in the males. The legs of both sexes are mostly black with some yellow. Immature males are like females but often with more red and a single line along each side of the abdomen. Male S. fonscolombii can be mistaken for Crocothemis erythraea as both are very red dragonflies with yellow bases to the wings, red veins and pale pterostigma. However C. erythraea has no black on the legs, a broader body and no black on the head. Also C. erythraea females do not oviposit in tandem. The jizz of these two species is different and with some experience are easy to tell apart.

Sympetrum fonscolombii is a widespread and common species in much of central and southern Europe including most Mediterranean islands, North Africa, the Middle East, Mongolia, south-western Asia, including the Indian Subcontinent, the Indian Ocean Islands and Sri Lanka. In Europe it is resident in the south of its range but in some years it migrates northward. From the 1990s onwards has increasingly been found in northwest Europe, including Belgium, Sweden, Finland, Poland, Britain and Ireland. It is the only Libellulidae to be found in the Azores and it is also found on the Canary Islands and Madeira. It breeds in a wide range of habitats including marshes, lakes, ponds, permanent and seasonal rivers. It is able to recolonize dry areas after a rainfall