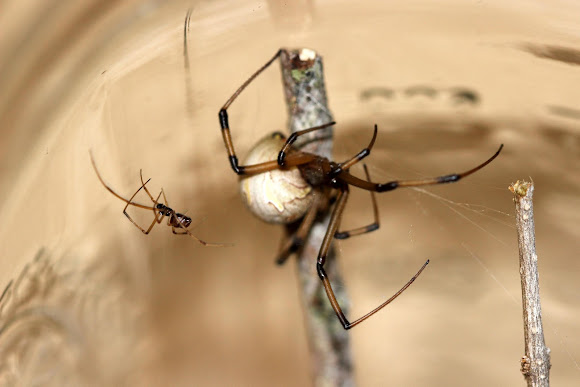 A lightly colored female Brown Widow and a male found in her web. This female is very light in color, which is not uncommon. The tiny male positioned himself behind the female as I was taking pics.

Found all over south Florida, but much more common in and around man-made structures.

I have often collected Brown Widows for display, and have seen them in many color phases from pearly white to entirely black. In the black phase the only way to distinguish them from L. mactans is the egg sac. Speaking of the Black Widow, I have yet to see one in south Florida in over 3 years of looking, and they have also become much rarer in southern CA where I lived previously, and it appears that the Brown Widow is slowly outcompeting them and taking over the niche in these areas.