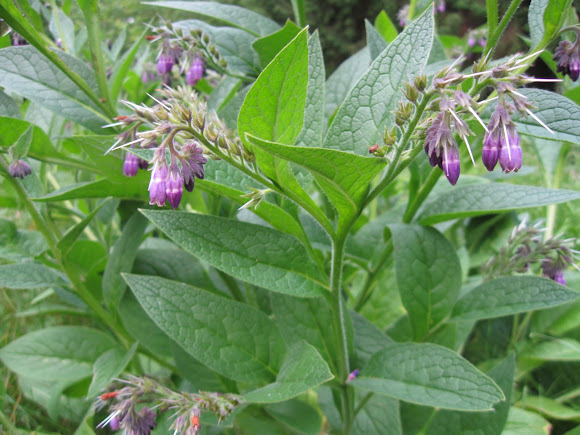 Comfrey (Symphytum officinale L.) is a perennial herb of the family Boraginaceae with a black, turnip-like root and large, hairy broad leaves that bears small bell-shaped flowers of various colours, typically cream or purplish, which may be striped. It is native to Europe, growing in damp, grassy places, and is locally frequent throughout Ireland and Britain on river banks and ditches. More common is the hybrid between S. offinale and S. asperum, Symphytum × uplandicum, known as Russian Comfrey, which is widespread in the British Isles, and which interbreeds with S. officinale. Compared to S. officinale, S. × uplandicum is generally more bristly and has flowers which tend to be more blue or violet.[1] Comfrey has long been recognised by both organic gardeners and herbalists for its great usefulness and versatility; of particular interest is the 'Bocking 14' cultivar of Russian Comfrey. This strain was developed during the 1950s by Lawrence D Hills, the founder of the Henry Doubleday Research Association (the organic gardening organisation itself named after the Quaker pioneer who first introduced Russian Comfrey into Britain in the 1910s) following trials at Bocking, near Braintree, the original home of the organization.

The comfrey bed should be well prepared by weeding thoroughly, and dressing with manure if available. Offsets should be planted 2–3 feet apart with the growing points just below the surface, whilst root segments should be buried about 2 inches deep. Keep the bed well watered until the young plants are established. Comfrey should not be harvested in its first season as it needs to become established. Any flowering stems should be removed as these will weaken the plant in its first year. Comfrey is a fast growing plant, producing huge amounts of leaf during the growing season, and hence is very nitrogen hungry. Although it will continue to grow no matter what, it will benefit from the addition of animal manure applied as a mulch, and can also be mulched with other nitrogen rich materials such as lawn mowings, and is one of the few plants that will tolerate the application of fresh urine diluted 50:50 with water, although this should not be regularly added as it may increase salt levels in the soil and have adverse effects on soil life such as worms. Mature comfrey plants can be harvested up to four or five times a year. They are ready for cutting when about 2 feet high, and, depending on seasonal conditions, this is usually in mid-Spring. Comfrey will rapidly regrow, and will be ready for further cutting about 5 weeks later. It is said that the best time to cut comfrey is shortly before flowering, for this is when it is at its most potent in terms of the nutrients that it offers. Comfrey can continue growing into mid-Autumn, but it is not advisable to continue taking cuttings after early Autumn in order to allow the plants to build up winter reserves. As the leaves die back and break down in winter, nutrients and minerals are transported back to the roots for use the following spring. Comfrey should be harvested by using either shears, a sickle, or a scythe to cut the plant about 2 inches above the ground, taking care handling it because the leaves and stems are covered in hairs that can irritate the skin. It is advisable to wear gloves when handling comfrey. Despite being sterile, Bocking 14 Russian Comfrey will steadily increase in size. It is therefore advisable to split it up every few years (and at the same time propagate more plants that can be shared with fellow gardeners!). It is however difficult to remove comfrey once established as it is very deep rooting, and any fragments left in the soil will regrow. Rotovation can be successful, but may take several seasons. The best way to eradicate comfrey is to very carefully dig it out, removing as much of the root as possible. This is best done in hot, dry summer weather, wherein the dry conditions will help to kill off any remaining root stumps. Comfrey is generally trouble free once established, although weaker or stressed plants can suffer from comfrey rust or mildew. Both are fungal diseases, although they rarely seriously reduce plant growth and thus do not generally require control. However infected plants should not be used for propagation purposes.