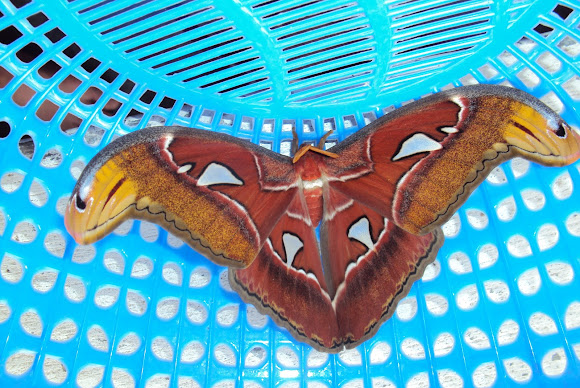 Atlas moths are predominantly tawny to maroon in colour with roughly triangular, diaphanous "eyes" on both forewing and hindwing, bordered in black. The purpose of these dramatic, gossamer portals is not clear, but they are thought to play a role in predator avoidance. Their bodies are hairy and disproportionately small compared to their wings. Patterns and colouration vary among the many described subspecies. Male Atlas moths are distinguished from females by their smaller size, more tapered wings, and larger, bushier antennae. Neither sex possess fully formed mouthparts and therefore do not feed; throughout their 1–2-week adult life they survive entirely on larval fat reserves that they build up while they are caterpillars.[6]

found across tropical and subtropical forests of southeast Asia...

this male was brought by my father from nearby forest surrounding an area of palm oil plantations. it was a cuddly litlle caterpillar back then and he fed the little creature until it becomes a pupa, hence out came this beautiful moth....It was worth the wait...

It really stands out with the blue background though & great that you got to witness the whole lifecycle!

I wish I could change the background, blue plastic basket to a forest scenery...but, that wouldn't be 'natural'...:)