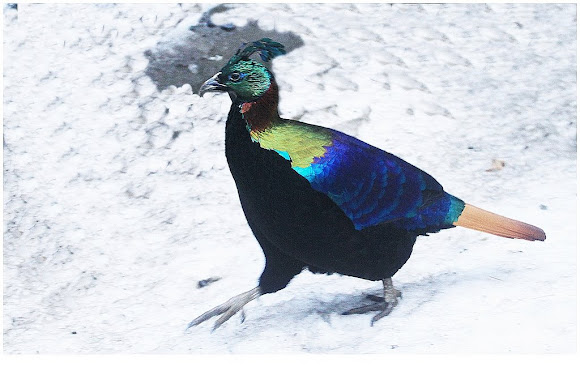 Other Names: Impeyan Pheasant, Impeyan Monal Range: The Himalayas, from eastern Afghanistan to western China Subspecies: None recognized at this time, but current studies may place birds in northwestern India has a new subspecies as they lack the white rump and have more green on breast. Habitat: Mountainous regions; in summer, they are found in rocky, grass covered meadows and winters in coniferous and mixed forests. Description: The males are adorned with beautiful metallic colors of green, purple, red and blue; they also have a large white patch on the rump. The breast and underparts are black and the tail is copper. You can see from the photograph on the right, that the males also have a very long crest, much like a peacock. The male also has a bare patch of turquoise blue skin around the eye.The hens, while much duller than the male, are still attractive. They are basically mottled brown overall, with black, buff and white streaks. Her throat is white and she has a short crest. Hens also have the blue patch around the eyes. First year males resemble the hens, but are larger and have black feathers on the neck and breast. Status in Wild: Considered stable throughout much of its range, but may have been eliminated in Afganistan. Interesting Facts: The national bird of Nepal. Commonly called the Impeyan after Lady Impey who first kept them in captivity. Avicultural Data Status in Aviculture: The Himalayan Monal is the most commonly kept species of the genus Lophophorus and are well established in North American and European aviaries. Breeding Season: Begins late April Breeding Age: Second year. Clutch Size: 4 to 6 Incubation Period: 28 days Misc. Aviculture Notes: Impeyans need to housed in a large, well-drained aviary. Like the Eared-Pheasants and Cheer, they love to dig with their strong bills and will often destroy the grass, shrubs and other greenery in the aviary. They do best on sandy soil that is easy to dig, but do be sure to keep it dry. They can tolerate cold weather very well, but need plenty of shelter and shade from the hot summer sun as they are birds from the cool mountain forests and unable to withstand extreme heat. This species has been quite susceptible to the West Nile Virus in the United States and several have been lost to the disease in the last few years. Most aviculturists keep this species in pairs, although it is believed they are polygamous in the wild. Overall, the Himalayan Monal is a wonderful addition to the aviary and despite being a primarily montane species, they have adapted well to many climates and do very well in the aviary. They are big gentle birds and many hens will become very tame. The call can be very loud at times, so if neighbors are close, be sure to warn them!

What a cool bird!

Ashish thanks for sharing your knowledge

Like seen Peacocks, Monals also seen spectacular Males... This is male..!!
http://en.wikipedia.org/wiki/Himalayan_M...
This bird is one of threatened due to its beauty...!!