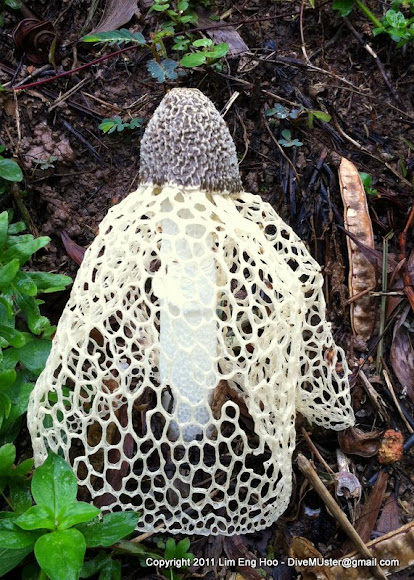 Stinkhorn fungus in the Phallaceae family. Other names it is known by are bamboo fungus, bamboo pith, long net stinkhorn, crinoline stinkhorn or veiled lady. The fungus is characterised by a conical to bell-shaped cap on a stipe and a lacy "skirt" (called the indusium) that hangs from beneath the cap. Mature fruit bodies are up to 30 cm (12 in) tall with a cap that is 2–4 cm (0.8–1.6 in) long. The cap is covered with a greenish spore-containing slime (termed the gleba), which attract flies and other insects that eat the spores and disperse them. The method of reproduction for stinkhorns is different from many mushrooms, which normally use the air to spread their spores. Stinkhorns instead produce a sticky spore mass on their tip which has a sharp, sickly-sweet odor of carrion to attract bees, and flies. The mature fruiting bodies can be smelled from a considerable distance in the woods and at close quarters most people find the cloying stink extremely repulsive. The flies land in the gleba and consume the slime, depositing it as excrement elsewhere. In older fungi the slime is eventually removed, leaving the pale off-white, bare pitted and ridged surface exposed. The fruit bodies develop during the night, and are short-lived, typically lasting 1–3 days.

The fungus is saprobic—deriving nutrients from breaking down wood and plant organic matter. Growing alone or gregariously in woods, especially in disturbed-ground areas and among wood chips. In Asia, it grows among bamboo forests and is typically found after heavy rains.