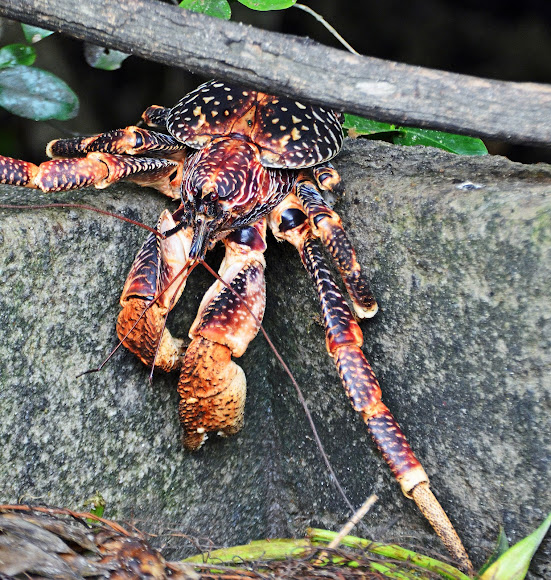 The rare and threatened coconut crab is the largest terrestrial arthropod in the world, and has a body length of up to 40 cm, a weight of up to 4 kg and a leg span of almost 1 m. The front pair of legs has large claws, and next two pairs are walking legs allowing coconut crabs to climb vertical surfaces such as coconut trees. The coconut crab’s only predator is man, and this species has sadly been extirpated from some of its original habitats such as the mainlands of Australia and Madagascar.

Underground burrows and rock crevices, where it hides during the day. The coconut crab is purely terrestrial although it starts its life cycle as a larva in the ocean. Distribution: follows that of the coconut palm in the Indian and Central Pacific oceans. Spotted here on Chumbe Island (a coral rag island), getting into a compost tip.

In 1981, the coconut crab was listed on the IUCN Red List as vulnerable, but a lack of biological data resulted into it being listed as data deficient since 1996. Research into this species in the East African region remains limited, but fishermen have reported decreasing sightings. Chumbe Island, a coral nature reserve off Zanzibar developed since 1991, hopes to assist in this by comparing Chumbe's healthy population with neighbouring findings, so that the coconut crab may gain international attention to support its protection. My thanks to forest ranger Chaga at Chumbe for showing me where to find coconut crabs during day time. Find out more about Chumbe Island at http://www.chumbeisland.com

Thanks Narjess! This one was on Chumbe Island too. It looks like we've been to quite a few identical places :-) Looking forward to the video.

Beautiful, great shot! I was VERY lucky to see one last month in Zanzibar (Chumbe Island). Took a few shots and a short video, will be posting it soon :)

Fun fact! The coconut crab is the world’s largest terrestrial arthropod, with a leg span of over 3 feet and weighing up to 9 pounds. Although huge, it is dwarfed by its marine cousin the Japanese spider crab (Macrocheira kaempferi), which is the largest arthropod in the world. One specimen, caught in 1921, had a leg span of 12 feet and weighed 41 pounds!

Thanks Carol and Reza!

Awesome! Congratulations on being featured in the recent blog.

Thank you J! This came as a surprise :-)

Congratulations, Daniele! Your enormous coconut crab was featured in my blog, "It's Life - unique abilities for unique organisms" today!
http://blog.projectnoah.org/post/4414706...

Thanks for your comment Argybee. If you want to do more research/reading, the issue is discussed in:
M. M. Drew, S. Harzsch, M. Stensmyr, S. Erland & B. S. Hansson (2010). "A review of the biology and ecology of the Robber Crab, Birgus latro (Linnaeus, 1767) (Anomura: Coenobitidae)". Zoologischer Anzeiger 249 (1): 45–67.
Unfortunately you need a subscription to access it.. There are also a few bits in this book we can be accessed freely:
http://www.scribd.com/doc/46315493/Cocon...
I actually have a picture of a juvenile still in its shell which I have to upload!

Magnificent Daniele. You have given me something to research tonight. I am particularly curious about your reference to mainland Australia being an original habitat for it. I always believed coconuts were only introduced here very recently... so I will read on.... thanks for this fabulous pic.

Thanks Scott! I may have the largest arthropod but you have the most colourful one!

I guess I missed this. Congratulations Daniele!

Thanks everyone for your comments! Apart from the fact that the animal is to be noted for its exceptional size as a terrestrial arthropod, it's also an opportunity to attract attention to a species which is currently lacking conservation data. Only one shot unfortunately: the animal was actually quite shy and retreated to its digs as I tried to get closer. I saw two more specimen at night time but the pics are not that good as I tried to avoid flash...