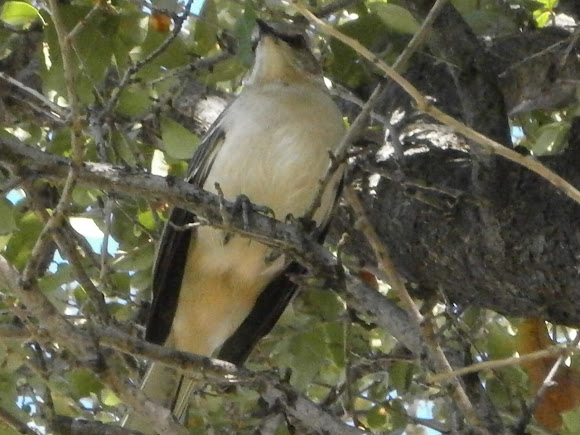 It appers to be a full grown male mocking bird. Found coming out of a bush at a Wendy's parking lot.

It lives in the city limits as well as forest, as well as plain areas reaching all areas of the United States

This little guy was a tough cookie to capture a photo of. It was at a Wendy's parking lot in Irving Texas. I had just got my brand new camera and had it freshly charged and ready to start taking photos. I found this guy in the flower bed possibly looking for bugs. I was inexperienced at the time and was too giddy I think and I gave him a startle. Not knowing about how to approach a bird I accidently startled him and he flew up in the tree. it was about a fourteen foot tree and luckily all I had to do was extend my camera enough and I got this shot. Mockingbirds are so called for their mimicking ability. They will mock other bird calls for different reasons. Their is another bird not of Texas but of the Australian region; and that is the lyre bird. those birds can imitate just about anything from a chainsaw to a camera with an after effect of machinery clicks. mimicry is one of the best survival strategies for many different animals. The best camouflage I have ever seen is in the Bird, Insect, fish families. This bird is one of the most common birds in North America.

Welcome to Project Noah, thanks for sharing your spottings with all of us.

This guy came out of a bush and landed in the tree as in the picture. I thoght he was not going to let me take his picture.