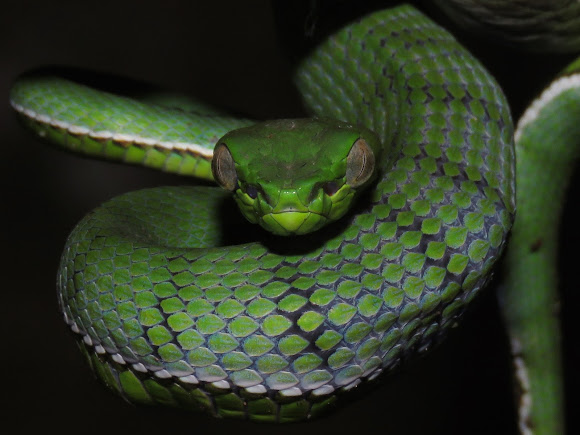 Found this Sabah Pit Viper - Popeia sabahi on the first night I was at the Park, from the bloated tummy, it looks like it has just eaten, probably a few hours earlier. This was a juvenile, just around 0.5 meter in length. Love finding Pit Vipers in the wild as they usually stays in the same place for weeks if not disturbed. After seeing it on the first day, I went back to the same tree/bush everyday for the next 5 days; both day time and night time to visits it and also to show to other visitors visiting the Park and interested to see a Viper/venomous snake.

Tropical forest, endemic to the island of Borneo.

On the same tree that this Pit Viper was resting, there was an Orchid plant that has fallen from the tree above, it has managed to 'grow' on the small tree and there was a single flower left on its flower stalk. I didn't even noticed the tiny Orchid on the first day I found this Snake as I was more focused on it but when I showed the Snake to PN Ranger ChunXingWong 2 days later, he noticed the tiny Orchid while we were taking turns to take the pic. We had lots of fun taking pics of both the Snake and Orchid as can be seen in Pic#4

This is a stunning animal. Beautiful photos, and excellent notes too. Thanks, Albert.

Thanks too, @WilliamsFamily for your appreciation :)

What a beautiful snake! Such bright colors!

Wow,amazing series Albert,beautiful,congrats on the well deserved SOTD and thanks for sharing

Thanks, @Daniele for the SOTD :)

Thanks too, @Lauren, @Bernadette and @triggsturner for your kind words and appreciation :)

It's raining snakes this week on Project Noah! Congratulations Albert, this great series is our Spotting of the Day. Glad to see you and Chun Xing Wong had more Sabah adventures together!

"Endemic to the island of Borneo, this alluring Sabah Pit Viper (Popeia sabahi) is our Spotting of the Day! This shot shows the snake's pit organ beautifully: you can locate it as a depression with dark markings between the eye and the nostril. The pit organs of pit vipers (subfamily Crotalinae) and boas (family Boidae) can detect infrared radiation from warm bodies. At night, the pit organs allow the snakes to literally 'see' an image of their predator or prey, in the very same way an infrared camera does.
Find out more about the anatomy and physiology of infrared-sensitive pit organs in crotaline snakes: https://buff.ly/2PfDC8l "

Great series of images and story Albert! I particularly like pics 3 and 4.

Bernadette S a year ago

What a great series! I love that the orchid is hiding in there, too.

Love the last picture! This one has scary eyes.