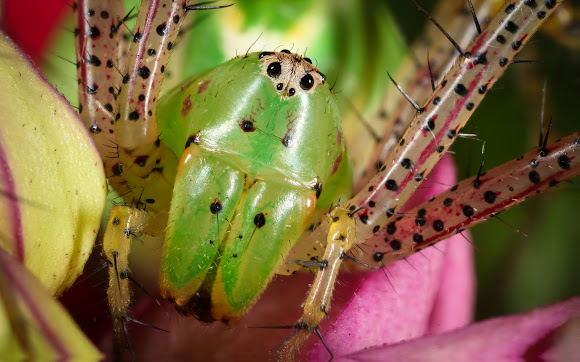 conspicuous, large, bright green spider found on many kinds of shrublike plants throughout the southern United States and is the largest North American lynx spider. Although it is common throughout Florida and aggressively attacks its insect prey, it very seldom bites humans. While its bite is of little concern to humans, the green lynx spider is of interest because of its potential use in agricultural pest management.

In North America, P. viridans has one generation a year under field conditions and apparently constructs one egg sac, typically in September and October, although two or more may be constructed in the southern part of its range. After an egg sac is constructed, the female guards it continuously and vigorously. Usually, she hangs upside down from the sac and will rush at anything that threatens it. Each egg sac contains 25 to 600 bright orange eggs, with an average of approximately 200 eggs. Eggs require 11 to 16 days to hatch, depending on air temperature. Each egg transforms to a postembryo (incorrectly called a deutovum in some of the literature). The postembryo of the green lynx, like that of other spiders, is without tarsal claws and mouth parts, and the eyes are functionless. No setae or hairs are present on the body.

Awesome pic, I'm guessing this wasn't taken with a 'point and shoot', just a guess.

Hi Rick! I adore green lynx spiders and this shot is simply terrific! Welcome aboard to Project Noah.

Just want to let you know how much we appreciate the information you include. PN is all about education and connecting people with nature. You have a new fain in me!

Wow so pretty but yet so freaky

Lynx spiders are so striking, and this is a great shot of the spider's face. Well done!