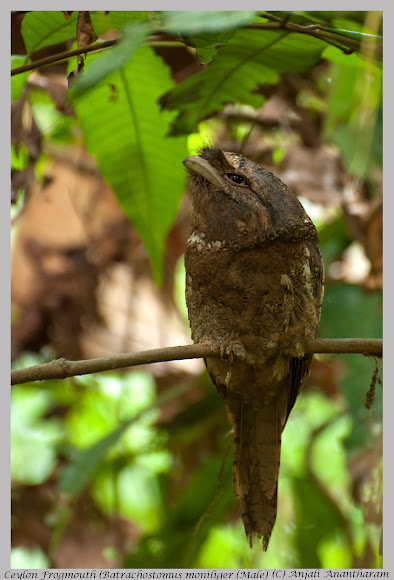 Is a small frogmouth found in the Western Ghats of south India and Sri Lanka. Related to the nightjars, they are nocturnal and are found in forest habitats.

This species is found in the Western Ghats of southwest India and Sri Lanka. Its habitat is dense tropical forest usually with dense undergrowth but sometimes found in more disturbed habitats including plantations. Their presence can be overlooked due to their nocturnal behaviour and camouflage.

The one in the first photograph is a male which is much smaller than the female in the second photograph...

Vipin.. I shld be really thankful for the guide who helped us spot this beautiful bird... :)

Great spotting and information. Thanks.

that is a really sad situation. But i do hope it has some chances of survival in the protected areas.
Slow breeders are in peril everywhere. :(

@VivBraznell : It is very, very difficult to spot them untill one has a very keen eye to spot and know where to spot them...Hardly seen during the day (except at the roosting site), they breed between January and March. Sightings of these birds is highly difficult due to its ability to camouflage. The call of the bird is also rare and can be heard only during courtship. During breeding, the birds build a nest - a pad made of moss, lichen and bark.

@ ctsetan : This species has been reported from different parts of karnataka which was not known before, they are slow-breeding birds -- it only lays one egg twice a year may be its the result of habitat destruction due to largescale felling in plantations and forests. this bird is highly sensitive and prefers evergreen patches. Secondly, being an insectivore, it prefers to avoid plantations with a lot of pesticide and insecticide. Consuming any insect in such plantation would be fatal to this species.

lovely waiting for the updates!!

Thanks, everyone... @ Atul ..It had been on my list for a long time now was lucky to spot them in my recent trip last weekend..Will be posting the female frogmoth's photograph seperately...

Incredible! If the eyes were closed it could easily be mistaken for a piece of wood/part of a branch. Great shot!

Nice spotting anjali, i saw this bird in DeccanHerald recently. Seems like this is endangered.. is it ???

lovely never seen one of these before !!
its on my wish list ,thanks for sharing such lovely spottings.