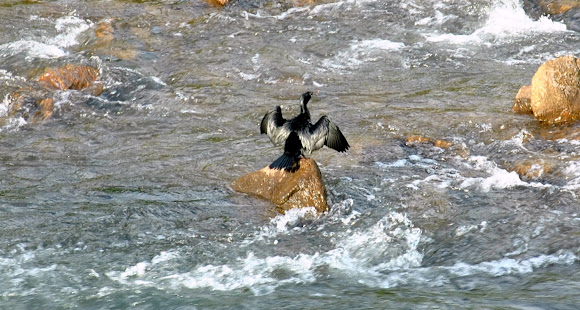 This is a very common and widespread bird species. It feeds on the sea, in estuaries, and on freshwater lakes and rivers. Northern birds migrate south and winter along any coast that is well-supplied with fish. The type subspecies, P. c. carbo, is found mainly in Atlantic waters and nearby inland areas: on western European coasts and south to North Africa, the Faroe Islands, Iceland and Greenland; and on the eastern seaboard of North America, though in America it breeds only in the north of its range, in the Canadian maritime provinces. The subspecies found in Australasian waters, P. carbo novaehollandiae, has a crest. In New Zealand it is known as the Black Shag or by its Māori name; Kawau. The syntype is in the collection of the Museum of New Zealand Te Papa Tongarewa.The 80–100 cm long White-breasted Cormorant P. c. lucidus found in sub-Saharan Africa, has a white neck and breast. It is often treated as a full species, Phalacrocorax lucidus (e.g. Sibley & Monroe, 1990, Sinclair, Hockey and Tarboton, 2002) In addition to the Australasian and African forms, Phalacrocorax carbo novaehollandiae and P. carbo lucidus mentioned above, other geographically distinct subspecies are recognised, including P. c. sinensis (western Europe to east Asia), P. c. maroccanus (north-western Africa), and P. c. hannedae (Japan). Some authors treat all these as allospecies of a P. carbo superspecies group.

The Great Cormorant breeds mainly on coasts, nesting on cliffs or in trees (which are eventually killed by the droppings), but also increasingly inland. 3-4 eggs are laid in a nest of seaweed or twigs. The Great Cormorant can dive to considerable depths, but often feeds in shallow water. It frequently brings prey to the surface. A wide variety of fish are taken: cormorants are often noticed eating eels, but this may reflect the considerable time taken to subdue an eel and position it for swallowing, rather than any dominance of eels in the diet. In British waters, dive times of 20–30 seconds are common, with a recovery time on the surface around a third of the dive time.

Yes Saurabh - Please change ID to Cormorant as there are now 3 endorsements of the spotting. Thanks and good job,

Saurab I guess you might to correct the id for this bird..It is not a Darter..

Pretty sure Karen due to neck on darter usually snake like and brown-ish.

ya it differs in wing pattern with cormorant

Are you sure Mick? The wing pattern & neck stripe suggest Indian darter to me. Maybe Ashish or Atul could comment?

I would go with Great cormorant
Phalacrocorax carbo

Nice spot!
Wing coloration suggests this is an Indian darter rather than the great cormorant.