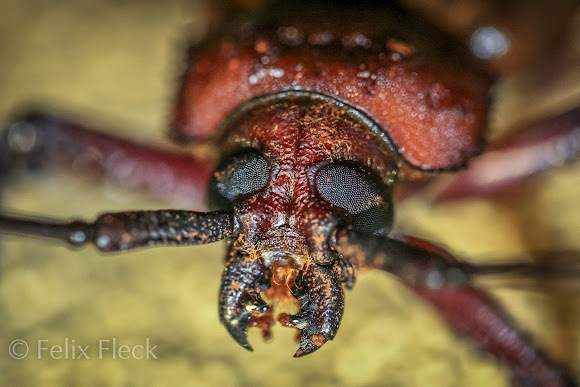 Large cerambycid, at about 6cm from head to the tip of the abdomen. Elytra are light brown, while head, thorax, and legs are reddish brown. The lateral edges of thorax are serrated and it possesses strong large mandibles.

Found at night attracted to lights, in an area of farmland interspersed with patches of rainforest on the Atherton Tablelands.

I found this reference on https://www.whatsthatbug.com/2010/12/16/... Apparently, it's from an online publication which is no longer available. “The information provided noted that the large white grubs (larvae) of A. spinicollis tunnel into trees and feed upon the wood and that large oval (exit) holes are often observed on the bark. The species usually attacks dead timber but beetles are occasionally found in living trees feeding upon the green wood (Anon., 1934). As they burrow through the wood, they close up the tunnel behind them with the excreta being pressed into a hard mass with the posterior abdominal segment (Anon., 1934). The eggs are placed upon the bark or wood of the tree; the tiny larvae hatch from the eggs and immediately bore into the wood tissue; even at this stage, the mandibles are hard and strong (Anon., 1934). During September and October the mature larvae cease feeding and a gradual change occurs within their bodies; the larva contracts, the skin becomes loose and the body becomes soft and flabby; the larva becomes a pre-pupa which lasts about 2 weeks (Anon., 1934). The skin then splits along the back of the head and thorax and is gradually worked down the length of the body by a series of convulsive movements and then cast off, revealing a pearly white pupa (Anon., 1934). The pupa rests in its pupal chamber for about 2 months; after the final metamorphosis occurs, the pupal skin is cast off and the adult beetle emerges and remains in the wood for a few days before eating its way out of the tree (Anon., 1934).”