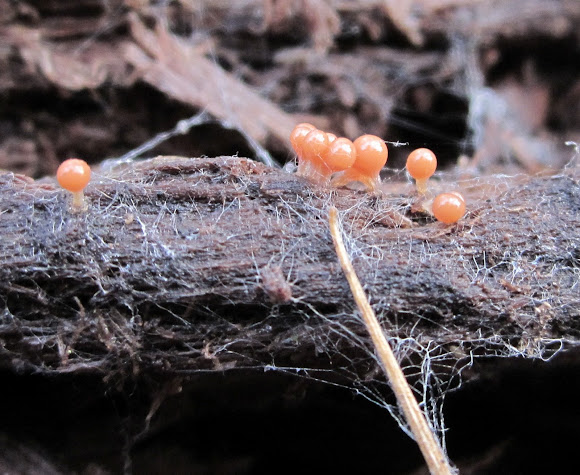 The plasmodium is white and pink to red at maturity. The small to large accumulations of fine, shiny yellow-olive to olive-green or brown fruit bodies are usually petiolate, rarely sessile sporangia. They are cone-shaped to pear-shaped, up to 3 millimeters, and measure 0.6 to 0.8, rarely up to 1.3 millimeters in diameter. The Hypothallus is widened, shining colorless to brown and membranous. The cylindrical shaft is wrinkled, dark brown at the base, becoming lighter towards the top, and filled with up to 1 millimeter long, spore-like vesicles. The solid or membranous peridium is yellow, with thin bodies are often translucent, but thickened and down as deep, shallow and rudimentary Calyculus outlasting. The olive in mass to olive-yellow capillitium consists of non-adult, simple or branched, deep olive-yellow, 5 to 6 microns thick elaters, which are in relief as three to five protruding spiral strands and run towards the ends pointed. The spore mass is olive-yellow to olive brown in transmitted light pale olive-yellow, occasionally with a still paler section. The spores are 10 to 13 microns in diameter, they mostly have a reticulated surface, the remaining surface is densely warty or prickly

The species is distributed worldwide. It is found throughout the year on dead wood of coniferous and deciduous trees. The fungus is found often together among other species of the generas "Trichia", "Arcyria" and "Cribraria", "wolf's milk" and "stemonitis typhina" ( http://www.discoverlife.org/mp/20q?searc... ) , ( http://www.hiddenforest.co.nz/slime/inde... )

thanks, you 2. @ antónio - yes thats the fun part of fungi and this "fungi-like" AMOEBOZOA (other kingdom). The variation of shapes are limitless but the colors too, which maked the id sometimes difficult ! And YES again: VEEERY tiny. had to use a trick to get some clear pictures !!
@ julie, aslo YES. they were intoduced to me , as fungi-slime molds, (grows as plant,gen closer related to animals, and neither) and Now they belong to another kingdom and build beter "efficient, reliable Tokyo train system" than we. And lucky for me, they get researched from mycologen, therefore i don't need to look into other genre to see some data about them!!