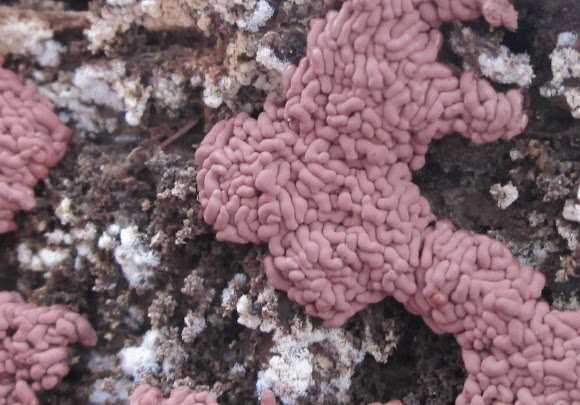 Sporocarps crowded, stalked, 1.5-3 mm total height, erect or ± superimposed and then subsessile or sessile and often forming a pseudoaethalium, copper-coloured or reddish in the fresh state, metallic, often with lavender or rose tints, browning with age. Hypothallus dark brown, confluent. Stalk 0.1-1.5 mm tall, dark brown. Peridium, in separate sporothecae, evanescent above and leaving a shallow calyculus, persistent in pseudoaethaliate forms and then splitting into lobes. Capillitium attached at the base, somewhat elastic, forming a loose net, with bulbous thickenings and numerous free ends, the upper part often breaking away with the peridium, the tubules 3-5 µm diam., bearing 3-4 spirals, these ± intermixed with spines, cogs, half-rings or occasional rings and reticulations. Spores pallid, 6-8 µm diam. Plasmodium yellow

hi lars, i definitly know that fact: i always write it in the "notes", that slime molds are no fungi, but it were!! slime mold get researched by "mycologen", they stand in fungi-books, and as "Amobozoas"they are really fungi-like.
-{ "Slime molds are not true fungis, but are usually grouped with them.True, slime molds are Myxomycota, which are currently classed as Protozoans, but current consensus here is to place them with Fungi. I can see what Yassar thinks "} this is what old project noah ranger: lori.tas says about it.--
i will not change them into category others, feel free to do it for me !! (but then all of my slime molds please ?! sorry for being so directly. no offense !!! greeting from nl

Alex, just to remind you - slime molds are not classified as fungi anymore. I had to change mine into "other" as well.

slime mold is strange and fascinating, isnt it