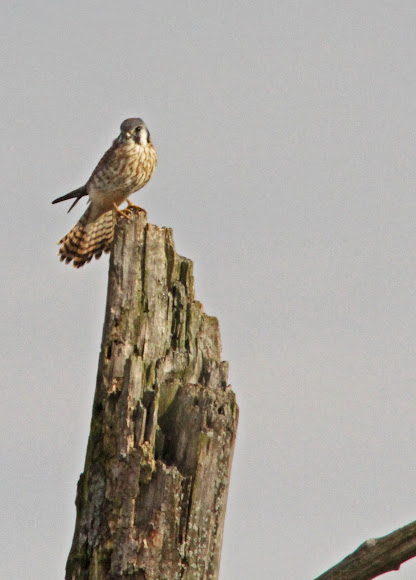 North America’s littlest falcon, the American Kestrel packs a predator’s fierce intensity into its small body. It's one of the most colorful of all raptors: the male’s slate-blue head and wings contrast elegantly with his rusty-red back and tail; the female has the same warm reddish on her wings, back, and tail. Hunting for insects and other small prey in open territory, kestrels perch on wires or poles, or hover facing into the wind, flapping and adjusting their long tails to stay in place. Kestrels are declining in parts of their range; you can help them by putting up nest boxes.

Habitat American Kestrels occupy habitats ranging from deserts and grasslands to alpine meadows. You’re most likely to see them perching on telephone wires along roadsides, in open country with short vegetation and few trees.

Size & Shape The slender American Kestrel is roughly the size and shape of a Mourning Dove, although it has a larger head; longer, narrow wings; and long, square-tipped tail. In flight, the wings are often bent and the wingtips swept back. Color Pattern American Kestrels are pale when seen from below and warm, rusty brown spotted with black above, with a black band near the tip of the tail. Males have slate-blue wings; females’ wings are reddish brown. Both sexes have pairs of black vertical slashes on the sides of their pale faces—sometimes called a “mustache” and a “sideburn."