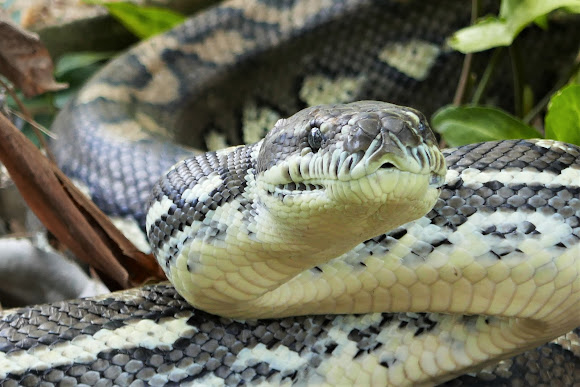 Today is the 6th anniversary of my joining Project Noah, and I was hoping to get out and about and spot something special to mark the occasion, but the weather had other ideas and forced me back indoors. C'est la vie, but I can't complain about the rain, particularly after such a severe drought. I didn't post this spotting at the time because I had already seen a python here just over a year ago (see notes), but my cat reminded me about this one this morning, and this spotting has its own story to tell, starting with lots and lots of commotion. On the day, from mid-morning and for several hours, dozens of birds were frantically squawking and they didn't let up. I knew it had to involve a snake or an owl, or some similar predatory animal to cause so much ado, but being off in a distant yard lulled me into paying them little attention. However, the commotion grew louder and drew ever closer until I finally saw a couple of magpies (Cracticus tibicen) in hot pursuit of a large python, and they were driving it right towards my yard. I remember saying loudly "Are you serious? Why me?"... and through the wire fence it came. Oh, happy days :-/ At least 2.5 metres (9 feet) in length, this was a large animal, and it was exhausted and irritable from hours of harassment, although its two magpie attackers continued to peck and squawk at it relentlessly. I ran to grab my camera, and when I returned I saw my two youngest cats had come to investigate. They were no more than a metre from the "now coiled and ready to strike at anything" snake, and its tight posture showed it really meant business. Having never been face-to-face with any snake, let alone a large python, they were as much curious as they were cautious. All animals know a predator when they see one, and they certainly knew this one was dangerous. We had a Mexican standoff, so I spoke to them gently to let them know I was coming and to actually "see me" so as not to spook them, before flushing them off to the side and away from the snake (1st and 2nd photos show the strike posture towards the cats. Needless to say, I had already moved them away before I took these photos). All-the-while the magpies were giving a running commentary, and they couldn't have cared less about me or the cats! Outnumbered, the python made a run for it through the fence and into my neighbour's yard, and of course the magpies followed. They were pecking at its tail, and even when close to the head they didn't let up. By this stage the poor animal was so sluggish and in no position to strike (5th photo), opting instead to flee towards the safety of the house and to disappear beneath it. And that's what happened. I didn't see it again that afternoon or evening, despite being on "python patrol", nor have I seen it since. My white cat (Lillie) still shows occasional jitters and is super-cautious when she's outside, particularly around those palms and shrubs, and I've learned to watch my cats to know what's happening in the yard. They are very wary, and if there's a snake about, they let me know. And that is exactly what Lillie did this morning. Her posture told me we may have another snake, and it could very well be... a python!

Dense foliage in a suburban backyard in Brisbane. A warm day had this python on the move, and no doubt caught out in the open. Carpet pythons may be encountered on the ground, draped across boughs of trees, or coiled up in undergrowth. They are frequently found residing in the roofs of houses, even in well-settled suburban areas. As the crow flies, I am only 3 kms from Brisbane's CBD.

A previous spotting of a python hunting a ringtail possum, also in my yard but a different snake. https://www.projectnoah.org/spottings/37... Lots of high anxiety in Dec 2017, but this new spotting was no-less anxious. Coincidentally, both spottings were amongst the same palms, but one was in the upper foliage, whereas the other was in the garden directly below.

Thanks for the nomination, Daniele. And thank you, Tukup and Maria. My cats are the indoor-outdoor variety. In at night... and rainy/stormy/windy/cold days. Summer is too hot here to keep them indoors 24/7. Cats being cats, they slumber most of the day. Most of their indoor antics are at 3AM. My next place will be more suitable for cat enclosures, because I also worry when they're outdoors, particularly when I'm not at home.

Oh, Neil. That was an engrossing illustrated story to read! It reinforced my decision to keep my cats indoors, however. We only have one venomous snake where I live and it bit my senior cat (who died last year) when I still let him outside. My two younger cats just have to admire the animals through the windows and screened porch.

It had to happen Neil ;-) Your spotting has been nominated for the Spotting of the Week. The winner will be chosen by the Project Noah Rangers based on a combination of factors including: uniqueness of the shot, status of the organism (for example, rare or endangered), quality of the information provided in the habitat and description sections. There is a subjective element, of course; the spotting with the highest number of Ranger votes is chosen. Congratulations on being nominated!

My place seems to be magnet for them, so I'll send you a couple down, yeah! One each for you and Leuba. I love to see them too, and they are fascinating and beautiful animals. I just worry about them eating my pets and resident possums. RSI = red snake ingestion? Yum

Brilliant spotting Neil. Adorable other animal reactions. Can't help but admire these snakes. Our Morelias have long since gone due to human activities... and people now complain about possum population levels!!
Careful about RSI.

I really appreciate your wonderful comment, Rob. Thank you so much. This is what I do when I'm housebound due to the weather and would rather be walking...ie: I write. And also thanks to you, Hema. Those two cats are my girls and they are a handful. My boy cat is almost twice their age, but he is so patient and tolerant, and they take full advantage of his long-suffering, gentle disposition. They do the same to me too :-/

Wonderful series and back story Neil. We dont get snakes here as I am sure you know so always a treat to see them here on PN. Congratulations on your anniversary. I always look forward to your spottings.

A belated congrats on your PN Anniversary!

I see too many! What ever happened to little tree snakes visiting my yard? Those pit sensors fascinate me too. Bredl's Python is also impressive. Not good for Trypophobes.

As long as it's submitted this year Neil it's eligible. I love those pit sensors :-) It's been too long since I saw one of these...
https://www.projectnoah.org/spottings/10...

That Bushmaster is an interesting species. I've never really had a close look before, but those scales are so gnarly. Some very cool snakes in Ecuador. Thanks, Tukup. And thanks as well, Daniele. I've added it to the mission. As I spotted it last year, I didn't think it was eligible.

Great series of shots, Neil and a great story too.

Great shots and congrats on 6 years. I had a similar experience rescuing a neighbor's cat from a huge Bushmaster (Lachesis muta muta). Thanks for sharing.

This spotting is perfect for our 2019 Best Photo mission:
https://www.projectnoah.org/missions/219...

Birthday? Do I get cake? I certainly hope so. Thanks, Sukanya.