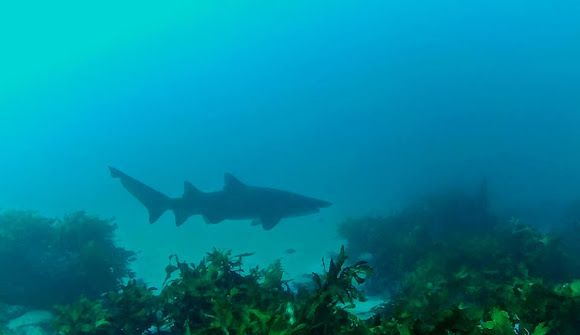 The "grey nurse shark" is the first species of shark I ever saw. I was only 6 or 7 years old and was mesmerised by its massive size and razor-sharp teeth, but also kind of terrified - it was the stuff of nightmares to a little kid. That was at Taronga Park Zoo in Sydney, and they had an aquarium with sharks and other marine creatures. But as I grew up I would occasionally see them at the beach, most often at this one (North Avoca Beach), out beyond the breakers. I remember being told to "count the fins" if I ever encountered a shark, and if there were two (dorsal) fins, or three including the long tail breaking the surface of the water, then it was a grey nurse and therefore harmless! Any fear I had of them had long-since-passed, and my siblings and I were water babies and totally fearless of anything other than being dumped by the odd humongous wave. Being shark bait never occurred to us, with any species, and despite the grey nurse's fearsome appearance and strong swimming ability, it is a relatively placid and slow-moving shark with no confirmed human fatalities. That's not bad for an animal that's related to the great white shark Carcharodon carcharias. To quote my niece who dives with these sharks regularly... "they are so placid, big and scary looking, but the old Labrador of the sea." This is a beautiful and fascinating species, and the reference links provide tons of information. Full credit goes to Byron Diver of DIVE Imports Australia, Erina, New South Wales, Australia, for this spotting and photo. Thanks, Byron.

This spotting was located off the (south) Avoca Beach headland, on the NSW Central Coast. Grey nurse sharks usually inhabit sandy coastal waters, estuaries, shallow bays, and rocky or tropical reefs and caves, at depths of up to 190 metres. It is a nocturnal feeder. During the day, they take shelter near rocks, overhangs, caves and reefs often at relatively shallow depths (<20 m). This is the typical environment where divers encounter them, hovering just above the bottom in large sandy gutters and caves. However, at night they leave the shelter and hunt over the ocean bottom, often ranging far from their shelter. This is also a migratory species during the summer and winter months.

Critically Endangered Species: A study mapping the eastern Australian grey nurse shark population has found it has declined rapidly over the last few decades, with only 400 breeding sharks left, too few to maintain a healthy population - https://www.mq.edu.au/newsroom/2019/02/0... The east coast population is listed as "critically endangered", and the west coast population is listed as "vulnerable".... This species became the first protected shark in the world when the New South Wales Government declared it a protected species in 1984 - https://www.environment.gov.au/marine/ma... Grey nurse shark conservation - https://en.wikipedia.org/wiki/Grey_nurse... This species is therefore listed as "vulnerable" on the International Union for Conservation of Nature (IUCN) Red List of Threatened Species.

Drop bears are far more dangerous, Tukup. These sharks are pretty mellow and not interested in people. I say "shark bait" because bigger and badder things lurk in Australian waters. Great whites, bronze whalers, tiger sharks, bull sharks, are all common. As kids, we didn't think about them at all, but I do remember a frenzy of hammerhead sharks back in the 1970's that contained a thousand or more animals. The water was churned white, and many beaches were closed. Off the same beach is something beautiful that I saw yesterday. I hope you can view this - https://www.facebook.com/centralcoastdro...

Maybe they're like your "Drop Bears" and only attack tourists :-) "Shark bait" seems an apt title. Thanks for sharing Neil.

The NSW Ambulance spokesman said it was unclear whether the man's injuries - described as "lacerations" and "scratches" - were caused by a bite. https://www.smh.com.au/national/nsw/manl... It's an odd story, but I'm sure these swimmers know the risks.

Ok.... it's after midnight now anyway.
I thought it was a bit weird getting hit by a grey nurse.

My hero-dom is short lived, Mark. Sorry to disappoint you. My niece dived with this shark and her dive buddy took the photo. I dived with many sharks in PNG, but not this one. And if someone got bitten by a grey nurse, they probably asked for it. I've just read the article - it was off Manly Beach. The guy was swimming in the dark with friends. I think there are nastier predators to worry about in our waters. What ever happened to "never swim in the dark"?

Yes to be looked after. Did you really dive with that Neil !!? 8-O
I suppose you heard of the grey nurse bite north NSW a couple of weeks ago. You're my hero for today. ;-)

Thank you, Gaia80. I've always found them to be fascinating and beautiful species, but didn't realise the extent of their endangerment until I started researching them.