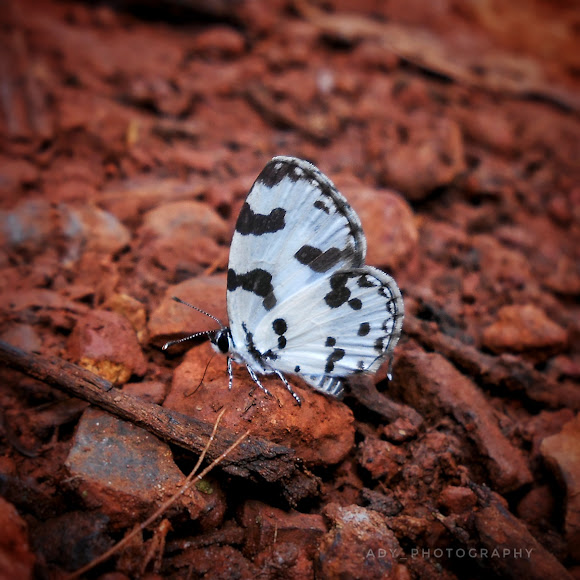 The male's upperside is dark brownish black, a broad medial oblique white band across both forewings and hindwings, not extended on the forewing above vein 5, above vein 3 produced shortly outwards and downwards into a hook-like form. Underside: white with the following black markings: On forewing a short, outwardly-pointed, oblique, clavate (club-shaped) streak from base joined below to a semi-circular broad band that reaches the costa; a short, outwardly oblique, upper diseal bar, its outer edge generally emarginate; the apex, the terraen narrowly, a large irregular sub-quadrate spot touching it in the middle and a very large inwardly oblique irregular spot or mark close to the tornus. On the hindwing: a hook-shaped mark at base sometimes slender; an inwardly oblique short clavate bar from apex, three coalescent spots extended outwards from the dorsum above the tornus formed into a sinuate (sinuous) irregular mark; a spot further outwards in interspace 4; a terminal series of slender lunules and an ancillary fine line. Antennae, head, thorax and abdomen black; beneath: the palpi, thorax and abdomen white. Female. Similar to the male on both upper and under sides, but on the former the white medial band is narrower, on the latter the black markings are broader. Antennae, head, thorax and abdomen as in the male.

This butterfly inhabits both primary and secondary rainforest where it is usually seen flying quite rapidly close to the ground, often along creeks. It visits low flowering bushes and plants like Leea, Blapharis, Alternanthera. The larval food plant is Zizyphus rugosa (Rhamnaceae). It is recorded as persisting in a wide range of habitats including: evergreen forest; scrubland subjected to slash and burn; riparian; grasslands and paddy field with human habitation (Padhaye et al. 2006). It is particularly abundant during the monsoon season. Males commonly imbibe from creek beds and mud puddles during the post-monsoon months, often in quite large numbers. Adults have a rapid, fairly erratic flight. Larvae have been recorded feeding on Ziziphus (Rhamnaceae) (Vane-Wright and De Jong 2003). The species occurs up to an elevation of 600m (Khanal, 2006) and seem to be quite restricted to low elevations (Sreekumar & Balakrishnan, 2001). Seasonally the species is active during the summer, late monsoon, early winter and late winter (Padhye et al, 2006).