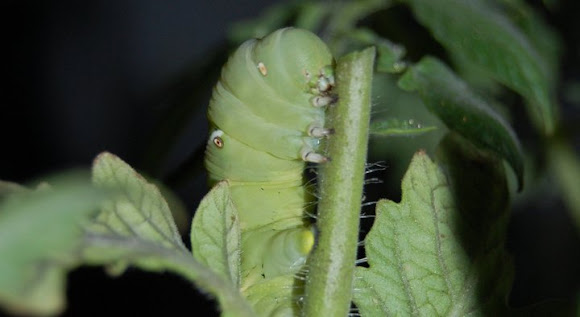 The Five-Spotted Hawkmoth (Manduca quinquemaculata) is a brown and gray hawk moth of the Sphingidae family. The caterpillar is often referred to as the tomato hornworm and can be a major pest in gardens. Tomato hornworms are closely related to (and sometimes confused with) the tobacco hornworm (Manduca sexta). This confusion arises because caterpillars of both species feed on the foliage of various plants from the family Solanaceae, so either species can be found on tobacco or tomato leaves, and the plant on which the caterpillar is found does not indicate its species. The larvae of these species can be distinguished by their lateral markings; tomato hornworms have eight V-shaped markings while tobacco hornworms have seven diagonal lines.[2] Furthermore, the caterpillars can be distinguished from the larval stage onwards by the color of the horns on their back ends: M. quinquemaculata caterpillars have black horns, while Manduca sexta caterpillars have red horns. The moths can be distinguished by the number of spots on their abdomen, with M. quinquemaculata having five.[2]

M. quinquemaculata is found throughout the United States, northwestern Mexico, and even southern Canada, but is less frequently found throughout the Great Plains and the southeast. Tomato hornworms are known to eat various plants from the family Solanaceae, commonly attacking tomato, eggplant, pepper, tobacco, moonflowers and potato. Accordingly, tomato hornworms are often found on defoliated tomato plants, the caterpillar clinging to the underside of a branch near the trunk. They are difficult to spot due to their green coloration. Gardeners' anecdotes have mentioned the use of a blacklight to find the hornworms on tomato plants at night, where they glow under the ultraviolet. They can be reduced by planting marigold flowers around these plants.[3]

He was munching on my Tomatoes.

Your description is correct, tomato and tobacco hornworms are easily confused. In this case, you've got a tobacco hornworm on your hands: it has seven diagonal stripes with a black line on its edge. If this were a tomato hornworm, it would have V-shaped marks on its sides.